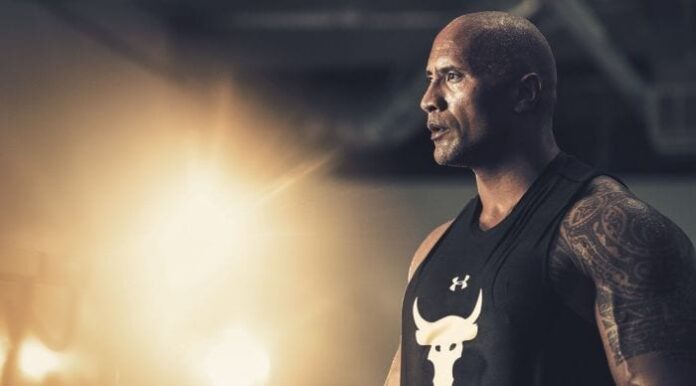 … in the latest trailer for his upcoming movie Rampage. In this soon to be blockbuster, Dwayne The Rock Johnson will square off with three giant animals – a wolf, a crocodile, and an albino gorilla. From the look at the latest clip, it is evident that Johnson and gorilla George will find a mutual language and the fight will be Two vs. Two.

In the movie, these three animals go on a rampage, hence the film name, and destroy everything in their path. The only man that can stop them is, of course, former WWE superstar turned actor The Rock. To be honest, if you needed protection from an oversized gorilla, crocodile, and wolf, you would pick People’s Champ to do it. But not everything is easy for this man. In the latest video, Johnson claims that he’s the badass who will stop the beasts, but the clip shows a bit different picture. Instead of showing him battling these animals Dwayne Johnson is filmed running for his life with the rest of mortals. Something didn’t go as planned. Same as us, Dwayne was surprised at what the edited video showed to the audience. But there’s a catch.

What Dwayne Johnson is doing is promoting the movie while at the same time making fun of himself in the process. This kind of behavior sits well with fans, and Johnson knows perfectly how to please his crowd. Many movie promotions do the same thing with their promos. Latest box office hits such as Guardians of the Galaxy and Thor: Ragnarok took a similar approach, and same can be said for upcoming Deadpool 2.

You may love or hate Dwayne Johnson’s, but he’s currently Hollywood’s best-paid actor. And deservedly. The man has shown that he can act, sing, and be an all-around entertainer. Yes, some of his movies like Baywatch didn’t get all that great reviews, but Jumanji: Welcome To The Jungle was a box office hit. And some of its success needs to be credited to Johnson promoting it. With all of the work this actor puts in supporting Rampage, you can expect it to smash the box office when it hits theaters in April.