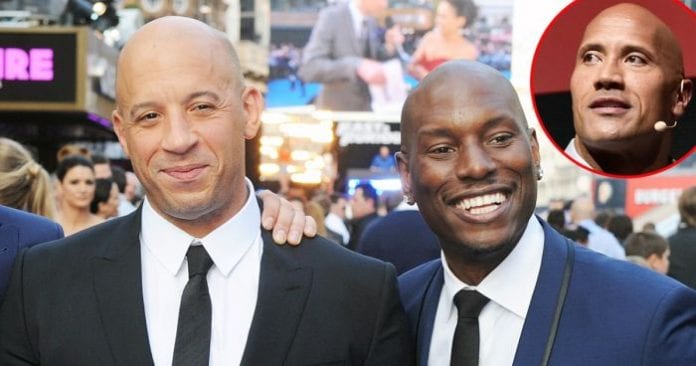 It’s hard to forget the feud that Tyrese Gibson had with Dwayne The Rock Johnson. It was one-sided tough, Dwayne had nothing against Gibson. Tyrese, on the other hand, accused People’s Champ that he’s ruining the Fast & Furious franchise. At one point, rapper threatened that he’d leave the franchise if The Rock continues to be part of it. In the end, he calmed down, and two men have come to an agreement. In a recent turnaround now it seems that Jumanji: Welcome to The Jungle star won’t be a part of the Fast 9.

But, the reason behind it, is not Tyrese Gibson. It’s one even bigger star from the named franchise. In a recent interview with Rolling Stone, Johnson said he had some sort of ‘professional differences’ with Vin Diesel.

The Great One explained: “Vin, and I had a few discussions, including an important face-to-face in my trailer. And what I came to realize is that we have a fundamental difference in philosophies on how we approach moviemaking and collaborating. It took me some time, but I’m grateful for that clarity. Whether we work together again or not.”

The fans weren’t happy to hear this. Johnson was the one lifting up these movies to a higher level and it all started with his appearance in Fast Five. His box office appeal was what spurred another three films. Now, Fast 9 is still in the plans and has a release date set for April 20th, 2020. But without Rampage superstar, it probably won’t make close to $1.2 billion that the Fate of The Furious grossed.

When asked directly if he’ll return for the 9th installment in the series Dwayne responded: “I’m not quite sure. Right now I’m concentrating on making the spinoff as good as it can be. But I wish him all the best, and I harbor no ill will there, just because of the clarity we have. Actually, you can erase that last part about ‘no ill will.’ We’ll just keep it with the clarity.”

What will happen with Johnson and his role in fast 9 remains to be seen, but the spin-off Hobbs&Shaw (current name) is on the schedule for The Rock. One thing is sure, Gibson will be thrilled if Dwayne Johnson leaves F&F family because he said that he’s the ‘poison’ that tears it apart. According to Gibson, Hobbs spin-off is the main reason for Fast 9 delay.