Working with Dwayne Johnson is a privilege these days in Hollywood, but it comes with certain risks. During the filming of a scene in Johnson’s action-adventure film Rampage, one of his co-stars got injured. Jeffrey Dean Morgan got hurt when Dwayne Johnson fell on him during an action sequence.

Morgan is 51-years old and plays Agent Russel in this arcade game adaptation. In this particular scene, he fights Johnson’s character, Davis Okoye who in one moment lands on top of him. Dean Morgan described what followed after Johnson hit him as the “sound of air coming out of his body and the cracking of ribs.”

Morgan holds no grudge against Fast & Furious superstar. But he has advice for those that are going to work with Dwayne Johnson in the future: “Dwayne’s got a lot of energy, so you got to bring it, but kind of going nose-to-nose with him makes you realize, ‘I’m a small human being.’ ” 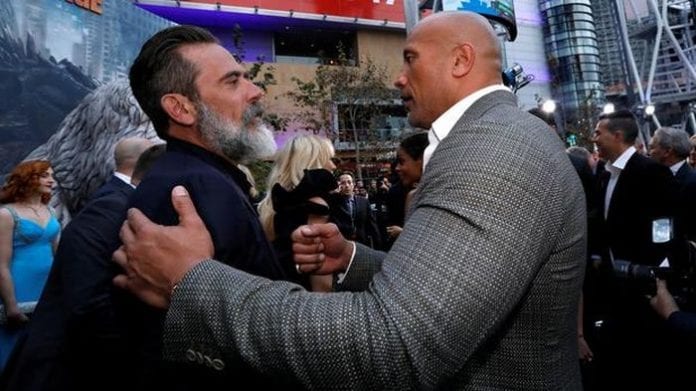 These two actors have similar height, but there’s the question of muscle mass where Johnson has the advantage. Morgan had a thing or two to say about this: “I’m as tall as he is, about, but my God, he’s built like a huge freezer, and he feels like it. We did a stunt at one point in the movie, and if you see it you’ll know exactly what I’m talking about; he landed on top of me, and I was supposed to be unconscious, and it made a sound come out of my body that I didn’t know I could possibly make.”

After Jeffrey released those sounds Dwayne The Rock Johnson started laughing. Morgan was afraid that they would have to do the scene again, which could severely injure him. Luckily they did it on the first cut.

Morgan continued the interview by talking what the experience is working with former WWE wrestler like: “Because he is able to make fun of himself a little bit, I think that it makes us love him. I mean, he’s obviously huge and a big muscly dude, but I think … it helps so much if the action star can be relatable. It’s kind of who he is in real life. No one does what he does … in this world of action, which has kind of propelled him to the top of this world.”