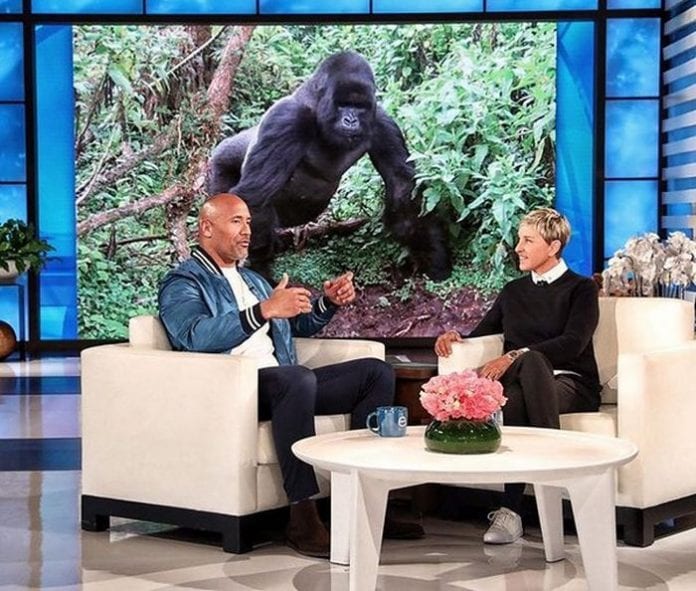 Dwayne Johnson is working on the promotion of his latest movie Rampage. During his promotional tour, he was a guest on The Ellen DeGeneres Show. During the conversation with Ellen, he talked about his movies, daughter, and another interesting thing.

His latest project Rampage revolves around the story which is centered on Dwayne Johnson and his friend – an albino gorilla George. George was saved from poachers by Johnson’s character Davis Okoye who is a primatologist. The two of them form a bond because Okoye gets better with animals than people. The adventure begins when George is mutated into a monster, and two of them together try to save the world from other mutated beasts. A crocodile and flying wolf!

You probably already know the plot, and you can see the movie in theaters from April 11th. The interesting part is that Johnson, as diligent as he is regarding his projects, spent some time with real gorillas in Atlanta Zoo. In the process, this guy became an acquaintance with their silver-back gorilla named Taz. Dwayne Johnson got so attached to this animal that he adopted his son.

The famous actor and a star of Jumanji: Welcome To The Jungle that just recently smashed the box office, explained what happened in one of his Instagram posts: “Cool moment today as I got to introduce my adopted son, IYAMBERE (Ee-Yom-Beh-Reh) to @theellenshow and the world. The research for my RAMPAGE role wound up being so much than I ever anticipate and I’m honored to have this incredible animal adopted in my name by our friends at [email protected] Can’t wait to meet you one day big guy and keep being a stud .”

Like it’s usually the case with People’s Champ this story also has a funny side to it. At the moment Johnson has two daughters, Jasmine and Simone, and a third one on the way. He joked with Ellen DeGeneres that because he only makes girls, this was his only chance for a male offspring and that because of that he adopted a gorilla.

Rampage hits the theaters on April 11th, and you shouldn’t miss this action-adventure blockbuster. Dwayne Johnson in leading role is a formula for fun.

How To Create A Professional – Looking Youtube Intro In A Cost-efficient Manner?