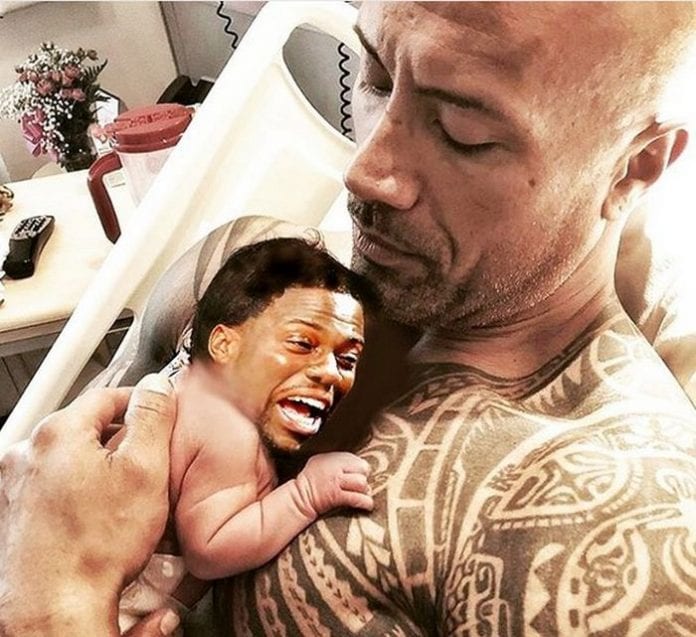 Dwayne Johnson is no longer cooking anything. He left the kitchen and found a new hobby. It’s called – photo-shopping! People’s Champ once again proved that he owns the internet. Social networks were made so that his charisma and sense of humor could be shared with the world. There’s no other explanation why he’s so good to have on your follower list.

The Great One shared the photo of his newly-born daughter last Monday. The Internet was overwhelmed with cuteness and with what Johnson calls a creating of a skin-to-skin bond. There was also those who photoshopped a massive rock onto The Rock’s chest, and that was funny as hell. But, Johnson wouldn’t be what he’s today if he didn’t lift that to a whole new level.

Instead of a rock or his baby’s face, Johnson put the head of his Internet nemesis, Kevin Hart. A face of screaming Kevin close to the breasts of his pappy. Dwayne Johnson won once again; no one can come close to this man. Not The Undertaker, nor John Cena or Cold Stone, nor Vin Diesel, or a giant crocodile. No, not even the Internet meme-makers. Dwayne Johnson is the ultimate winner.

His daughter Tiana Gia is only seven days old, and she’s already a victim of her daddy’s sense of humor. She won’t mind, the goal was to simply DESTROY Kevin Hart. A goal accomplished!

Of course, People’s Champ captioned a photo with a message for his Jumanji: Welcome to The Jungle co-star: “To my beloved son, @kevinhart4real. Twinkle Twinkle little Hart. I just don’t know where to start. Daddy will always love and protect your tiny little soul. Even though you were delivered directly out of the bu**hole. #Shhhh #JustShutYourLittleMouth #AndGoNightNight #OnDaddysPecMeat.”

Kevin Hart will undoubtedly try to retaliate, but we are not sure if there’s anything he can do. The ultimate of all burns was just delivered. Hart should just lay low for some time, hide from the press until the dust settles. This will go around the Internet for years. We hope Kevin can stay under the radar that long.

Why Use A VPN For Streaming?