Created by BioWare and published by Electronic Arts, “Dragon Age” a fantasy role-playing game, was first released in November 2009. The first installment, titled “Dragon Age: Origins” was soon followed by the second entry, “Dragon Age II” which came out in March 2011. Then three years later, in November 2014, the third part titled “Dragon Age: Inquisition” was released. It has been more than two years since then and not only did the company fail to deliver a sequel, but it also didn’t do anything to bring at least some news about the anticipated title.

In spite of the fact that the fans have been waiting for Dragon Age sequel for quite some time, we should not forget that the game has received three spin-offs in the meantime. These include: “Dragon Age Legends” a strategy RPG which has the same setting as “Dragon Age II,” “Dragon Age Journeys” and “Heroes of Dragon Age” launched in 2013.

Nonetheless, Internet forums are flooded with questions about “Dragon Age 4” and we can’t blame the gamers for being impatient. The official release date is not the only information that Electronic Arts still refuses to reveal. The company has not made any comment about the game updates, either. We can only guess what upgrades it might receive based on the player’s comments and wishes. For instance, one fan wrote: “There were features missing from the previous games I’d like to see back.” So, the developers might take such and similar desires into consideration and maybe reintroduce the option which enables the gamers to position their groups in the game.

All things considered, at the moment we can only keep our fingers crossed and hope that we’ll see the new installment in one or two years’ time.  Probably 2018. We promise to keep you updated.

Some predictions for Dragon Age 4

Disclaimer: This is more speculative than my other lore and theory posts. It’s not to be taken too seriously. I have to get an MRI in the morning and my lower spine feels like someone jabbed a blade through it. This is mostly just a distraction for me and an outline for a post-Trespasser fanfic I’ve neglected for far too long.

1. The Veil is definitely coming down.

One day the magic will come back – all of it. Everyone will be just like they were. The shadows will part and the skies will open wide. When he rises, everyone will see

The Fade is separated from the World

Opposition in all things:

By My Will alone is Balance sundered

And the world given new life

-from Canticle of Threnodies, describing the creation of the Veil

By the Maker’s will I decree

Harmony in all things.

And the world given eternal life.

-the end of Canticle of Exaltations 1:1-1:14, also known as Drakon’s prophecy, which describes the fall of the Veil

2. Dragon Age 4’s new protagonist will be an agent of the Inquisition who will play the role of Drakon in his prophecy. Possibly called Blade of the Faith. The Inquisitor may come back as a playable character as well, just at different points in the game.

I covered my face, fearful,

But the Lady took my hands from my eyes,

Saying, *Remember the fire. You must pass

Through it alone to be forged anew.

Look! Look upon the Light so you

May lead others here through the darkness,

Blade of the Faith!”

Solas knows everything about us. Who we are, how we work, our strengths and weaknesses…

Then we find people he doesn’t know.

Many swords of myth and legend are found in Dragon Age, but most remain confined to their digital world. That’s why we asked local blacksmith Shawn Cunningham of Front Step Forge to bring the Inquisition Longsword to life.

Along with Maevaris Tilani, he formed a group called the Lucerni to restore and redeem Tevinter –a fight many thought hopeless.

-ending of Trespasser regarding Dorian returning to Tevinter

Look! Look upon the Light so you

May lead others here through the darkness,

Blade of the Faith!”

5. Solas will be an enemy character we can spare if we choose to, much like Loghain. This would have to be done well by BioWare, however. Despite what one may think of Solas, he is the only one who has experience fighting the Evanuris and Forgotten Ones. He also has knowledge only one from the time of Elvhenan would know about the Titans (and likely the Old Gods as well).

6. Dragon Age is going in a “war of the gods and god-like entities” direction. The next game’s new protagonist may not be a “god” at their prime, but they will have to be formidable to face Solas, and very likely the elven pantheon when the Veil falls. There’s also the Titans and remaining Old Gods to consider. 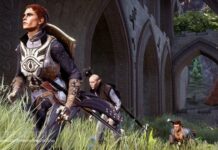 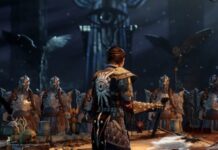