With 2018 NFL Draft steadily approaching, everyone is thinking ‘how will Cowboys replace Dez Bryant?’ But, Dallas franchise has other needs. In addition to the wide receiver, they are in need of a safety. Their roster is very thin at this position. There are few quality safeties still on the free market, and the possibility of trading for Earl Thomas still lingers in the air. Because of this, drafting a safety doesn’t seem like a ‘must’ for America’s Team.

It should be! A few days ago Byron Jones confirmed that he’s now a cornerback. Other safeties on the roster include the names of Jeff Heath, Xavier Woods and Kavon Frazier. Additions are necessary. Kenny Vaccaro and Eric Reid are still FA, and Thomas is available for trade, but he’s expensive. All of them are good players, but Cowboys should also look at young players available via draft.

One of the names that stand out at the position is Derwin James. He’s the best safety in the class, so he probably won’t be available at No19. Cowboys will need to trade up to top 10 in order to pick him. Their first and second round picks would be the price for someones top 10 pick. 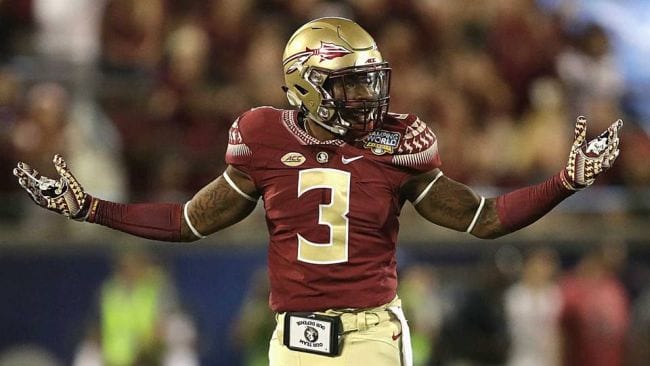 According to former NFL safety Louis Riddick, the position of safety is a ’premium’ one, and every team needs to have a quality starter at the position. When asked is James worth trading up he responded: “Do I think Derwin James is worth moving up for? Oh yeah, I do. He’s special.”

Dallas Cowboys have a decision to make. Trading up for Derwin James is a costly option. But, so is trading for Earl Thomas. Safeties market is good these days for teams. Just two weeks ago Tyrann Mathieu signed a one-year deal with Houston Texans worth $7 million. A bargain! Vaccaro would probably cost only a portion of that. So why aren’t Cowboys pursuing him?

The thing is, Dallas franchise will probably stick to their picks, and draft ‘the best player available.’ After the draft, they will evaluate their options. But, just for a moment there, trading up for James sounded good. Who knows, maybe that’s precisely what Cowboys will do.