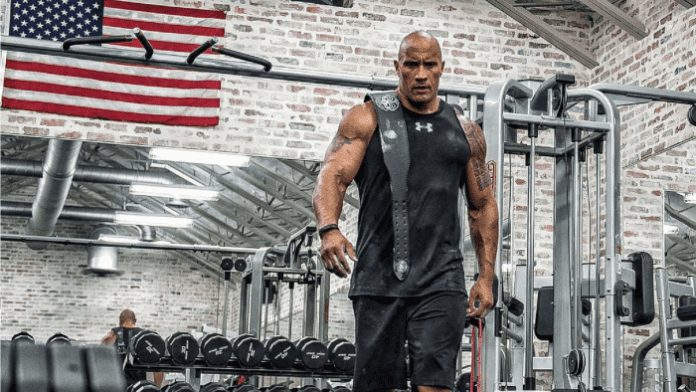 Dwayne The Rock Johnson is Hollywood’s best-paid actor. And most popular. And most handsome. And with a reason. The man turns every movie he stars in into a box office hit. OK, not every, thank you Baywatch, but you get our point. It’s also important to mention that Baywatch was buried by critics, it earned more than it was invested in it, anyway. But turn your heads towards Jumanji: Welcome to The Jungle, which almost reached $1 billion. The upcoming Rampage and Skyscraper will be hits; we don’t doubt it.

But where is all of this coming from? Well, let’s talk his handsomeness. He is a physical specimen there’s o doubt about it. But his action star figure also came from hours spent in a gym. The man works his a*s out every day. This is a well-known fact. His first passion seems to be working out in a gym. He starts every day with training for a couple of hours. This is his favorite thing in life, just look at his Instagram profile. Every other picture is from the gym. Working out is both his hobby and his passion. The reason behind his success.

But it’s not all there is to him. His work duties are many. Johnson films new movies, he’s promoting those that are in theaters, he’s planning new ones. The Rock goes to LA to give Lakers a pep talk. Man is everywhere, but he still finds the time for another hobby. One much more relaxing. If you dig deep into his Instagram, you will see photos of him – fishing. Yes, Dwayne The Rock Johnson loves fishing. He even has a private pond full of bass fish as you can see in the picture.

He described his second hobby, or call it a part-time passion in following words: “As an animal lover – both land and water – I’ve been raising my bass for years now on our farm. I feed them like kings with live bait and train them to be extra aggressive killers. I have specialists come in to inspect the water, vegetation, and ecosystem to make sure they’re living like the top of the food chain predators they are. Big daddy comes home to recharge his batteries & spend time with them, and not even one of these ungrateful fat hogs will strike my topwater plug I’ve been working for an hour now. Cool.. just remember who’s in charge of the fish food truck you sum b*****.