Opptrends 2020
Home Entertainment Do You Know How Much Dwayne Johnson Earns On Social Media?! 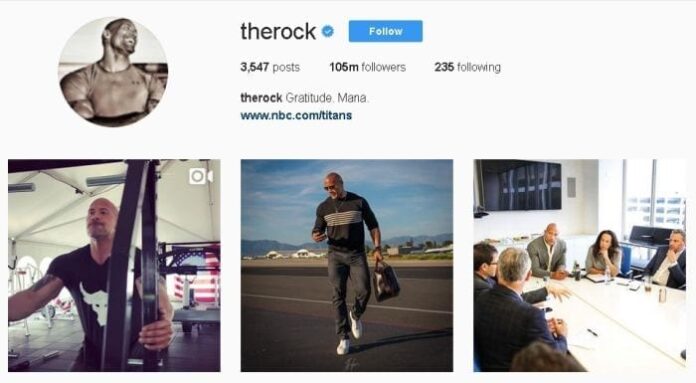 Dwayne Johnson works hard. As you know, hard work pays off, so The Rock is going to receive a hefty paycheck for his upcoming project Red Notice. But the interesting fact about this film is that People’s Champ has a specific clause tied to his contract. The base salary for Red Notice is $21 million. Another $1 million is due to Johnson if he promotes this movie on social media platforms such as Twitter, Instagram, and Facebook.

Considering how many followers Dwayne Johnson has on different social media this isn’t really a surprise. Only on Instagram, he has 105 million followers. On Twitter, this number stands at 13 million.

The combined sum which he is going to earn stands at $22 million, and this is Johnson biggest paycheck to date.

In recent years, with the explosion in popularity of platforms such as Instagram, The Rock became known as someone who took advantage of it. He shares news about his personal life, casting, upcoming movies, new projects on a daily basis. The most recent films such as Jumanji: Welcome To The Jungle, Skyscraper, and Rampage were heavily promoted on social media by one of Hollywood’s best-paid actors.

The upcoming film, Red Notice will be produced by Beau Flynn of FlynnPictureCo., and Seven Bucks Productions led by Dwayne Johnson, Dany Garcia, and Hiram Garcia. Writing and directing will be handled by Rawson Marshall Thurber. According to various sources, Thurber will have an eight-figure salary. The budget for this project is set at $125 million. Reports say that the production will start in the spring of next year, while the release date is expected to be set for summer of 2020.

In the mid-time, while you wait for Red Notice, you can see Dwayne Johnson in Rampage which is still in the theaters. On July 12th his action-thriller Skyscraper will have a worldwide release, while the work on Jungle Cruise and Fast & Furious spin-off is starting during the summer. First on the schedule is Disney’s blockbuster which will begin filming this month, while Hobbs & Shaw will be in works in late August.

Aladdin Vs. The Rock Mashup Trailer