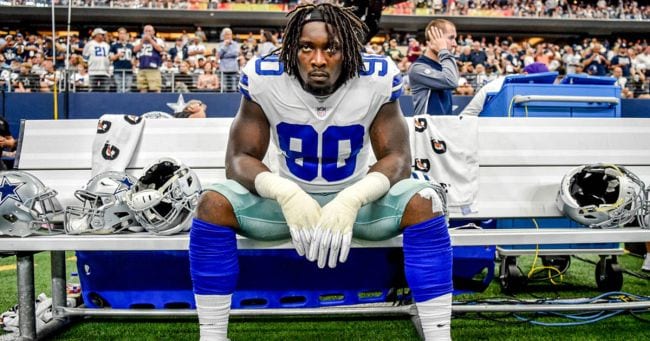 Dallas Cowboys and their DE DeMarcus Lawrence were unable to reach agreement on a new long-term deal. Instead, Pro Bowl defensive end penned the franchise tag. This one-year contract will guarantee him $17.143 million for 2018.

The decision was announced on Monday, 24 hours before the deadline teams have to tag their player before free agency. David Canter, who is the agent of Lawrence wrote on Twitter that his client had signed the tag.

Congratulations to #TeamDEC client @TankLawrence who has officially signed his 1 year franchise contract with @dallascowboys This is just the beginning!!!!

Lawrence himself also took to Twitter to break the news, even before it became official: “Oh wow. Glad the media knows. I still haven’t heard anything haha. Either way, proud to be part of the @dallascowboys organization! Let’s go chase #6.”

DeMarcus Lawrence had a career year in 2017. He racked up 14.5 sacks which earned him his first Pro Bowl selection. The only player who had more sacks in 2017 was Chandler Jones of Arizona Cardinals who amassed 17.0. The Tank was tied at second spot with Calais Campbell of Jacksonville Jaguars both standing at 14.5. This number of sacks is the most for any Cowboys player since DeMarcus Ware had 19.0 in 2011.

After signing the tag, both Big D franchise and Lawrence now have more time to reach an agreement. To be exact, they have until 4 p.m. ET on July 15th to sign a long-term deal with their sack-master. If they fail to re-sign him by then, the player will be obligated to play under the franchise tag for the remainder of the season.

Lawrence had health issues in the past seasons, but in 2017 he was at the top of his game, and haven’t missed a match. So, when healthy, Lawrence has the ability to play well through the entire season. And this is something Cowboys will need out of him in the years to come.

The last player who signed a franchise tag with America’s Team was Dez Bryant, and he signed an extension shortly after. Considering that this is only the sixth time Dallas is using the tag, the chances are high that Lawrence will get his extension.