Opptrends 2022
Home Entertainment Deadpool: Back in Black #2 – Preview of the New Marvel Comic

Wade Wilson is going to spend some time in the black symbiote, in the new Deadpool: Back in Black #2 comic. Moreover, the fans will be thrilled to hear that the Power Pack is also included.

We all know that Deadpool is too strong, but the symbiote will provide him with the unimaginable powers. He will be able to devour everyone who tries to stop him. Deadpool will try to deal with all this power, but considering how (un)lucky he is, that may be the issue.

The new pages can be seen in the gallery with Ron Lim’s signature on the cover. ComicBook.com had an interview with the writer Cullen Bunn and here is what he has to say:” This series takes place in the 80s, so I wanted the stories, guest stars, and villains to represent that timeline. This also gave me the opportunity to use a few characters we don’t see much of these days. I’ve always wanted to write classic Power Pack because I love those characters. But I’ve also always wanted to write an Obnoxio the Clown story, and he works well with both Deadpool and Power Pack. Other characters who will appear are Machine Man, Black Cat, and Kraven the Hunter. And it would seem like Spider-Man would show up at some point, doesn’t it? In addition, there will be some new characters and some more modern characters who we’ll learn have been bumping around the Marvel Universe since the 80s.”

During the course of the Secret Wars in 1984, Deadpool met with the alien symbiote who was first Spider-Man’s black costume which transformed to the antihero Venom. That actually happened in the Deadpool’s Secret Secret Wars, but are you familiar with the fact that after Spider-Man rejected the costume, Deadpool was the one to pick it up and they had adventures together? Thanks to this series, The Deadpool Killogy, written by Cullen Bunn, you are going to find out.

Deadpool: Back in Black #2 will be in comic stores from October 19th. 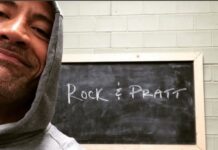