When we think of all the MCU and DCEU movies, together with X-Men franchise, we can only say that there are a plethora of films centered on numerous superheroes. In fact, there are so many such films that some of you might as well be tempted to say that the producers may reach the point of “superhero fatigue” should these titles become formulaic and predictable. However, if we remember the last year’s R-rated Deadpool, this point seems to be rather far in the future, for this movie showed us there’s so much more about superheroes we have still to learn. It was so well-received that they started working on the sequel sooner than anyone could expect.

Much to our delight, Ryan Reynolds and the rest of the crew decided to release the movie teaser, which features Deadpool alone. The teaser was delivered to accompany the release of another superhero movie, Logan, which came out on March 2.

In case you haven’t watched the teaser yet, you can watch it below. You’ll see the great antihero being a superhero in the scene. To be more precise, when he realizes that an old man is being mugged right before his eyes, “Merc with a Mouth” wants to help him, and he hurries towards a phone booth where he can change into his costume. But, he ends up having difficulties doing so, as the booth is too small and he can’t seem to fit into the tight suit. When he finally manages to get dressed, it’s already too late to save the man.

Well, knowing what kind of a character Wade Wilson is, we should appreciate that he at least tried. Cable would probably be more successful if he was there. Speaking of him, if you pay attention, you will notice that the teaser also features his name; when Deadpool is in the phone booth, we can see that “Nathan Summers. Coming Soon” or something like that is written on it. When it comes to the question who will play this character in the upcoming title, the answer is still kept under wraps. There is a long list of possible actors, including Keira Knightly, Pierce Brosnan, and Russell Crowe.

Deadpool 2 is set to hit theaters sometime next year, so we can expect various changes until then. Follow us and we’ll keep you updated. 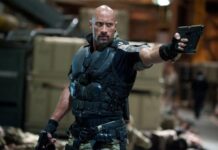