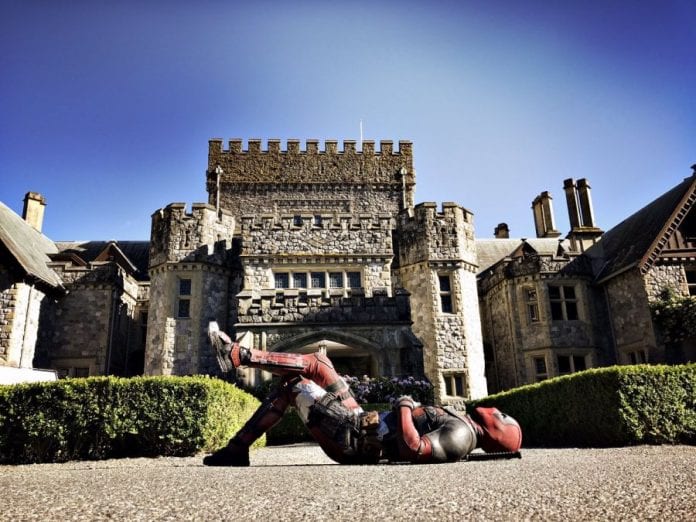 Deadpool’s success was enormous and difficult to predict at the time. The first movie managed to have the biggest opening weekend of all time for an R-rated film which would eventually become the highest-grossing movie in the studio’s X-Men franchise and the second-highest-grossing R-rated film ever. Yes, the success was surprising, but the announcement of the Deadpool 2 was not.

Deadpool 2 will be directed by David Leitch whereas Ryan Reynolds will return as the antihero Wade Wilson a.k.a. Deadpool. Furthermore, we will have a chance to see Stefan Kapicic as Colossus, Brianna Hildebrand as Negasonic Teenage Warhead and Karan Soni as Dopinder. However, Cable and Domino will join the sequel, played by Josh Brolin and Zazie Beetz respectively.

Josh Brolin posted series of photos on Instagram where he reveals what his character is going to look like, plus some photos from the set. In one of the pictures, his face was covered with blue mold in order to recreate the character as better as possible.

“Insanity on the brink,” wrote Brolin. “Face is morphing into something machine, fierce, hair sliced, arm machined, bulged. Where is Deadpool?!? Looking. Looking. All I got are these two molding me, prodding, turning me into something hard.”

Ryan Reynolds tweeted an official photo in which we can see Brolin’s final appearance as Cable, and that glowing eye causes some goosebumps. As a caption, Ryan wrote: “We all have that one, grumpy, heavily armed Uncle from the future.” In the other photo, Cable’s whole body is clearly seen and a teddy bear which hangs around the actor’s waist – a reference to Hope Summers.

We all have that one, grumpy, heavily armed Uncle from the future. #PremiumCABLE #MaximumAsshole

Luscious Zazie Beetz will play Domino and Reynolds shared a photo of her fully revealing her looks. He noted: “Some people just know how to work a red carpet.”

The image is similar to the one we have seen before, but instead of Deadpool posing on a rug in front of a fireplace, we have Domino in the same pose. An interesting detail is Deadpool’s suit (or Deadpool himself?) underneath her. Will Domino be a worthy enemy to Deadpool? Or perhaps an ally? Either way, she looks awesome, and we cannot wait to see her on screen. There is one more photo which shows her face only and a white mark around her eye is the first thing you would notice.

Some people just know how to work a red carpet. #Domino #DeadPool2

Filming has just started, and one of the first Easter Eggs has been found online. It is not a spoiler, so don’t worry but there is an interesting addition to a cab that is used on the set in Vancouver, Canada. The ad on top of the cab pitches an airline or travel agency called “Alpha Flight.” The photo was posted on Twitter. For those of you who don’t know, Alpha Flight is the most famous superhero team from Canada – we can call it the Canadian version of the X-Men or Avengers.

The details of the story are basically non-existent at this point, but we know that someone will celebrate a birthday in the film. A Twitter user Just Jared posted unofficial photos which feature Reynolds in a costume crashing what appears to be a children’s birthday party. He has a mask, but he is not wearing the rest of the outfit.

Ryan Reynolds commemorated the sequel production start with a photo. He was in a costume and behind him was a beautiful Charles Xavier’s school. We can see the Merc with the Mouth in full red-and-black uniform in front of the estate which is actually Hatley Castle in British Columbia, Canada. This building was used as the X-mansion in most of the X-Men movies such as the X2: X-Men United and X-Men: Apocalypse, for instance.

Shioli Kutsuna, the Japanese actress, has reportedly joined the squad and she will play a “key role” in the film, according to Deadline. In the meantime, Brolin showed us what kind of a muscle man he is going to be as mutant Cable. He posted a short video on Instagram where the fans could see his training routine for the Deadpool sequel. He called out Ryan Reynolds with an interesting caption. We are waiting for a response.

Cable will really stir the pot in the second installment of Deadpool, but there will be some other characters who will complicate Wade’s life. According to Deadline, Jack Kesy will play a villain in the movie. He had appeared in the FX series The Strain where he played a goth rock star infected with a vampiric virus, but he would later become a host body for the Muster. Yep. He should fit right in, as he could obviously deal with unconventional storylines. However, we don’t know the exact role he is going to have in the upcoming movie. There are rumors that he might portray antagonist named Black Tom who is a nemesis of the X-Men in the comics. This could be interesting to watch on screen because he also faces off with Cable at one point.

There were so many speculations about the actor who was going to play Cable in the new movie when we realized that he would be in it. One of the actors that could have ended as Cable was Michael Shannon who appeared in the Nocturnal Animals. It was surprising that Brolin was selected eventually, because Shannon was the top choice of the studio, wrote The Hollywood Reporter back in March. He had already appeared in three comic-book-based movies such as Batman v Superman: Dawn of Justice, Man of Steel and Jonah Hex.

However, we will not take it away from Brolin who deserved the role as much as Shannon. You could even see that Rob Liefield, co-creator of the Deadpool comics was thrilled about the choice. On Facebook, he posted: “It’s OFFICIAL!!! The amazing JOSH BROLIN is CABLE!! He will be joining @vancityreynolds and @zaziebeetz in #Deadpool 2!!! SO EXCITING!! Yes, it’s happening folks, Deadpool #Domino #Cable are united on screen!!!”

In March, Deadpool was teased with a short film which was shown even before Logan screening, which was Hugh Jackman’s final solo movie as Wolverine (he will be hard to replace). The short film is titled Deadpool: No Good Deed, it was written by Rhett Reese and directed by Leitch. If you haven’t seen it yet, you can check it out here. Oh yes, don’t miss Stan Lee who makes a cameo. And pay attention to the graffiti which are all around.

Tim Miller, the director of the first Deadpool, was supposed to return for the second movie, but that didn’t happen. Everyone was shocked at first, but equally brilliant Leitch replaced him, and we shall see if he is good or not. There were some rumors which indicated that he had arguments with Ryan Reynolds which was why he decided to leave. Whatever happened, happened and we will not burden ourselves with this.

Studio 20th Century Fox and producer Simon Kinberg confirmed that Deadpool 2 is going to be released in 2018. This was great news because the fans would have to wait too long for the sequel, but the question was when would the crew start shooting the film. We have already mentioned that the cast is working in Canada and they will stay there until September. It’s getting closer, and we are excited. How about you?