Tim Miller will not be directing the new Deadpool sequel. Some sources told The Hollywood Reporter that the famous director decided not to participate in the filming of the sequel when the creative differences arose. It appears that Miller and Ryan Reynolds, who will play the main role, have a different view on the direction of “the Merc with a Mouth”

It was confirmed back in April that the director Tim Miller and star Ryan Reynolds will return together with Rhett Reese and Paul Wernick. The filmmakers additionally verified that the comic book character Sable will appear in Deadpool 2.

Tim Miller is one of the main guys who convinced Fox about the whole idea of Deadpool. The movie was waiting to be developed after Reynolds played the role in X-Men Origins: Wolverine. Miller’s leaked test footage for Deadpool assured Fox that filming Deadpool is the right way to go.

The rest is history. The movie became the highest-grossing rated-R film, earning $782 million although the budget for it was “only” $58 million. It is essential for Fox to continue with Deadpool, considering that new Logan movie will be the last of the Wolverine saga.

The sequel of the new Deadpool will have to go on without Tim Miller. Be that as it may, Fox is being friendly about it and Miller will start working on the first part of the trilogy called Influx. 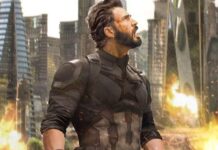