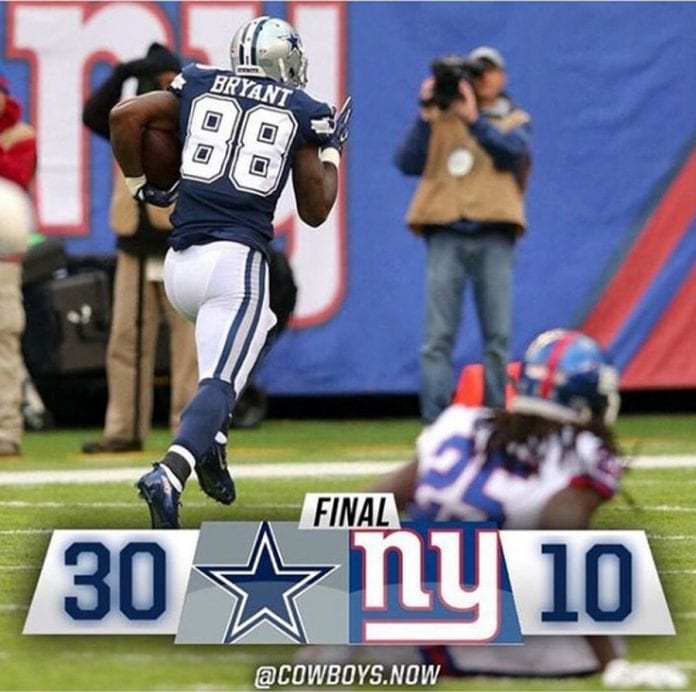 While others already wrote off Dallas Cowboys from reaching the playoff, fans are still hoping that it can be done. After a 30-10 win over Giants, this squad is one step closer to that goal.

We were able to watch two familiar rivals that once again met on the field. While both of these teams remember far better days, in the end, it was clear that Cowboys are better at this moment. Good for the fans of the biggest sport franchise is that big plays are back and that Dak did find his targets for huge gains which were enough to take down Giants.

Prescott was able to connect with Bryant (50 yards), Witten (20 yards) and Smith (81 yards) for TDs. Another big play came with 54-yard gain when he found Cole Beasley in crucial moments of the game, and that was the set up for Witten’s touchdown.

This is what Prescott said: “Those big plays were needed. Obviously they were great when they hit. They were fun to watch, to watch those guys run and do what they do best. Yeah, it was a grind, it was a grind early, it was a grind throughout the game, but we were finally able to get some momentum, get going and it got good right there in the fourth.”

With the last four games that were quite disappointing for Dak, where he had less than 200 pass yards on his stats, this Sunday was very good for him with a total of 332 yards. He also managed to complete 20 of his 30 attempts and had no interception, this was enough for 137.1 rating.

Here is the comment from Scott Linehan, offensive coordinator of Cowboys: “The big plays have eluded us, especially lately. It was big for that. We have been putting a lot of emphasis on it. We started to see signs of it last week, especially in the second half. We talked about that. We felt the trend was going in the right direction. You’ve got to just stick with it. You can’t force that. Big plays come when playmakers make big plays.”

The America’s Team was not able to brake Giants, and the score was tied at 10 with the clock ticking. They had less than 10 minutes and were playing against not so good NY that was 2-10 in the season and with a new coach. But, from that point on, Cowboys managed to take over control, and with few big plays, they ended up with 30-10 victory.