Well, last Sunday was a night to remember in the NFL. With a thriller in Pittsburgh at a Steelers vs. Patriots match, but also in Oakland. Dallas Cowboys snatched a win over Raiders and continued their playoffs hunt.

This was their last match without superstar RB Ezekiel Elliott. The 20-17 victory was secured with Dan Bailey’s field goal two minutes before the end of fourth quarter. This is Cowboys third straight victory which gives them a remote chance of reaching a wild-card round of playoffs.

Cowboys had 330 total yards, 136 of those came from running. Alfred Morris had 61 yards, while Dak Prescott added another 32. He also scored a TD, had 212 passing yards and 66.7 percent of completion.

Their opponents Oakland Raiders had similar numbers. Derek Carr threw for 171 yards and had two TD passes while Marshawn Lynch managed to add 76 yards by running. Their offense had a total of 293 yards. Despite good numbers, it was Cowboys defense that stepped up when needed to clinch the game in their favor.

Dallas took the first lead with a field goal by Dan Bailey. In the first half, they had another score, this time for a touchdown after Rod Smith’s run. Raiders had their chances to add some points to their table but did not manage to do that in the first half. The only real opportunity came when Giorgio Tavecchio missed a 39-yard field goal attempt.

The second half started with 100 yards return from Raiders special team, but the call was annulled after a holding penalty on one of the Oakland players. After that, Derek Carr led his team to a 90 yards drive, which after 11 plays was ended by Michael Crabtree TD.

The first tie of the game came after Dak Prescott’s pass was intercepted. Although interception was returned for a TD, it was canceled because the player was stopped by contact before reaching the end zone. After that, Cowboys defense stood its ground, and only allowed a field goal.

The game switched back in Dallas favor after above-mentioned Prescott touchdown. The drive was completed after successful passes to Witten and Bryant. The second 7-point score from Raiders came after Carr-Crabtree connection and game was once again tied.

Last drive of the Cowboys was going good and was crowned by Bryant’s 40-yard catch. Unfortunately, Cowboys failed to reach the end zone and had to settle for another field goal. 20-17.

The last drive of the game was led by Derek Carr who brought his team all up to the 8 yards from the goal line. After his final play broke, he scrambled and ran toward the end zone. But after the hit by Jeff Heath, he let the ball slip his hands. The referee decided it was a touchback and gave the ball to Dallas Cowboys for the 1st&10.

With this victory, Cowboys are still in the playoff hunt. They need to win two remaining games, and some other results to go their way. 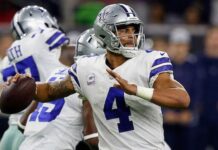 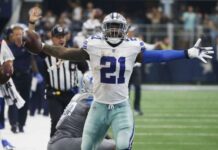 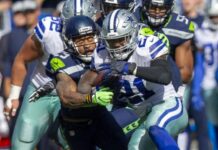 4 Things Dallas Cowboys Should Do To Improve Offense