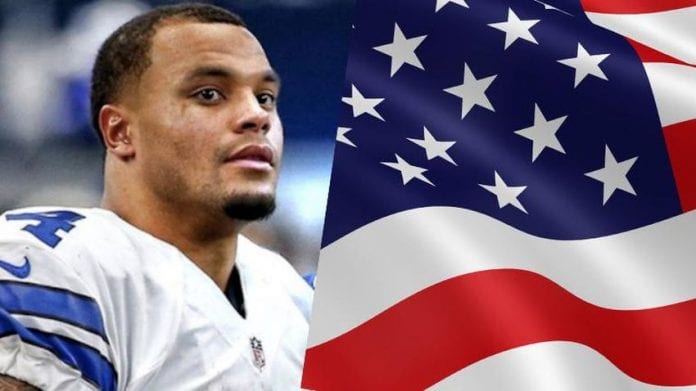 Some players in NFL protest during the National Anthem and Dak Prescott doesn’t intend to be a part of it. Colin Kaepernick started this trend last season, but Prescott said that he would not follow anyone that does this and that he would always stand during the anthem.

“I mean, it’s bigger than I think some of us think,” he said. “It’s just important for me to go out there, hand over my heart, represent our country and just be thankful and not take anything I’ve been given and my freedom for granted.”

Jerry Jones agrees. Jones talked on his weekly radio show with 105.3 The Fan about his feelings towards the anthem: “I just feel so strongly that the act of recognizing the flag is a salute to our country and all of the people that have sacrificed so that we can have the liberties we have. I feel very strongly that everyone should save that moment for the recognition of the flag in a positive way, so I like the way the Cowboys do it.”

The Cowboys players didn’t participate in the protest, but it was their free will. Darren McFadden, the Dallas Cowboys backup running back who will start instead of Elliott said that Jones didn’t tell the players that they had been forbidden to go to the protest. The choice was up to them.

Every team is linked to the National Anthem equally and the star the Cowboys have on their helmets is the national icon, plus they are recognized as “America’s Team.” Some people may find it insulting to see players attending the protests, but it is even more infuriating if they were to kneel during the National Anthem.

However, America is a free country, and everyone has a choice. Kaepernick chose to protest against the National Anthem, while Prescott has opted not to. Both players have their arguments and Prescott believes that the National Anthem is an important component of the sport and for the America’s Team. The Dallas Cowboys fans can only be proud of Dak Prescott.