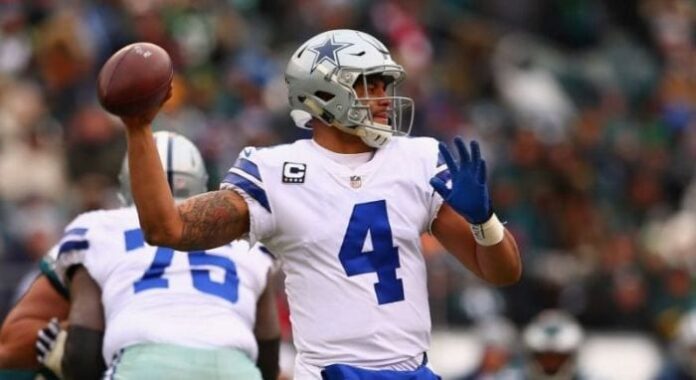 Dallas Cowboys quarterback Dak Prescott is entering his third NFL season, and he desires to be the best version of himself in 2018. Prescott, who is considered the best bargain deal at his position in the league is set to earn $630,000 in 2018. But, if he delivers during the upcoming season, he will be in for a massive pay rise.

Dak Prescott being humble as he is, claims that he feels no pressure coming into next season with contract talks on the way. Dak has his eyes set on the filed and wants to achieve other things in addition to the big contract.

Dallas Cowboys’ third-year QB will turn 25 on July 29th, and while there’s time for him to reach greatness, there is a long way to go to get there. During their history, America’s Team produced two Pro Football Hall of Famers at the quarterback position. Their names are Troy Aikman and Roger Staubach. At the moment Prescott is trying to exit the shadow of Cowboys long-time leader Tony Romo who passed for 34,183 yards, 248 touchdowns, and was selected to Pro Bowl four times.

But, regardless of what future holds for Dak, he needs to deal with the present first. Talking to the reporters last week, executive vice president of Dallas Cowboys Stephen Jones said that Big D franchise is working on their salary cap with Prescott’s extension on the mind.

During the first two seasons of his career, he passed for 6,991 yards, 45 touchdowns, and had 17 interceptions. In addition to that he amassed, 639 yards rushing, 12 rushing TDs all of that on 114 carries.