When Dak Prescott started instead of Tony Romo, Dallas Cowboys received two things. A young franchise quarterback, and a bargain deal at football’s most valuable position. But the amount that Prescott earns will surprise many, especially when you see how little it is compared to some other QBs.

Prescott was the 135th pick of 2016 NFL Draft, which means he was selected in the fourth round. With his rookie contract, Dak got $545,848 for the first year with $95,848 signing bonus divided over four years. Like you already know in his rookie season Prescott led America’s Team to a 13-3 record and divisional round of the playoffs. He was Offensive Rookie of The Year and was selected to the Pro Bowl. Not to mention that he sidelined Cowboys legend Tony Romo in the process.

In 2017 the expectations were set high for both Cowboys and Prescott. The team amassed 9-7 record which wasn’t enough for a playoff spot. Prescott regressed, and Dallas offense wasn’t fully firing on all cylinders. The Big D front office is now working on making offensive weapons more Dak-friendly which should bring desirable results this year. 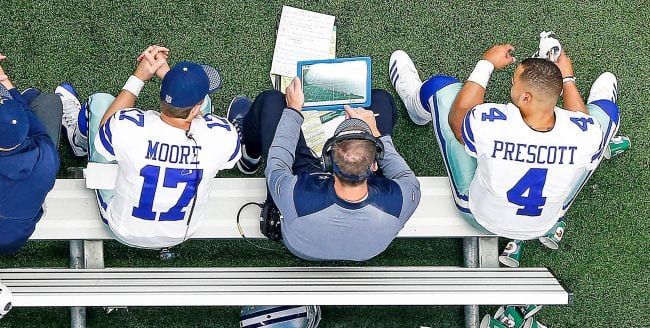 Another thing that is important is that Prescott, unlike his rookie partner Ezekiel Elliott has a perfect public image. Thanks to this, Dak is the most popular player in the league according to NFLPA. He’s topping their NFLPA Top 50 Player Sales List. Yes, Prescott is moving the most merchandise in the NFL. Also, he has endorsement deals with Adidas, AT&T, and Pepsi which brings him a lot of money.

But, his salary that he receives from Cowboys brought him $635,848 for 2017. This seems fair if you look at Dak as a second-year player, but when compared to others it’s a relatively low amount. His backup Kellen Moore received $775,000. And that’s not all. According to Mike Florio from PFT, the list of QB’s that earned more than Prescott last year is quite long. Here are just some of the names: Drew Stanton, Ryan Fitzpatrick, Paxton Lynch, Landry Jones, Ryan Griffin, Matt Moore, Scott Tolzien, Tyler Bray, Dan Orlovsky, Josh Johnson, Davis Webb, Austin Davis, Jacoby Brissett, Thad Lewis, Connor Cook, Josh Hobbs, David Fales.

Admit it; you haven’t heard for half of these players.

How Playing Scavenger Hunt can be a Better Virtual Team-Building Activity?

Richard Orland - September 28, 2022 0
A team that functions well as a unit is more successful, effective, and productive. Collaboration, motivation, and engagement between coworkers can all be improved...