Dallas Cowboys know that Randy Gregory is preparing to ask for reinstatement from NFL, but at the moment Big D franchise is not counting on him. However, if things go in the right direction, he could be available to Dallas Cowboys in a couple of months.

During an interview in February, Stephen Jones said that Dallas franchise is preparing for 2018 season as if Gregory won’t be coming back. But Randy is doing everything in his power to make things right and bring his career back on track.

Talking about of possibility of having Gregory during the summer Jerry Jones said: “He’s being very diligent in preparing his information and preparing his application. I have been proud of Randy during this offseason. I’m very aware of how hard he’s working to get back in the league and get back on the field.” 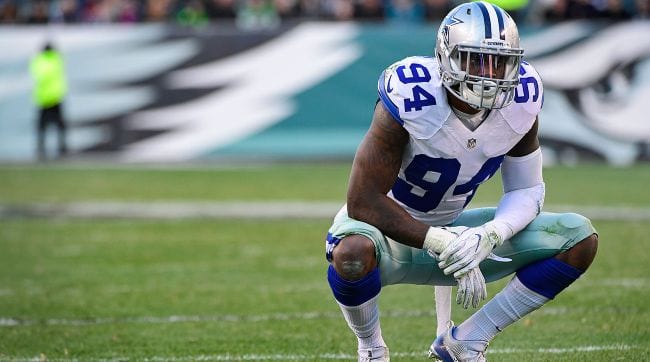 Gregory and his legal team are preparing themselves to present his case in the best light to the league. Among the documentation, they are going to file to the NFL in order to get reinstated, Randy has letters of support from his teammates Tyrone Crawford, Sean Lee and Jeff Heath.

Gregory’s attorney Daniel Moskowitz said that he’s “very proud” of Gregory and the manner in which he handled the process.

Although Cowboys will be happy to see Gregory back, it won’t happen overnight. The NFL substance abuse policy gives the commissioner a 60 day period to examine the documents filed for reinstatement and to make a decision. This means that if he presents for restoration next week, he could be ready for Cowboys summer camp which starts in Oxnard, California, in the final week of July.

Randy Gregory has missed last 30 out of possible 32 games in the previous two years. He was suspended due to multiple violations of NFL’s substance abuse policy. On his position Cowboys have recently signed Kony Ealy, and also have drafted Dorance Armstrong in the fourth round to ensure depth.