Opptrends 2022
Home Sport Cowboys Need To Trade Up For Calvin Ridley and Pair Him With...

Dallas Cowboys will look to draft a wide receiver in the first round of 2018 NFL Draft. Many people believe that the player that America’s Team pick will be a replacement for their No1 receiver Dez Bryant. But, what if Cowboys decide to draft a player that will supplement Bryant, and create a dangerous WR duo for The Boys.

Bryant had a revealing interview as the 2017 season ended where he stated that he would not take a pay cut. With a stance like this many believed that Big D franchise is going to cut him because his ability is in decline while his salary is on the rise. He’s 29 years old, and it will be no wonder if Cowboys decide on his successor during the upcoming NFL Combine in Indianapolis. But the story could take a U-turn if Dez accepts a contract extension that would include restructuring his deal to lower his salary cap hit. Then, the Cowboys could look to find their No2 receiver in the draft and not a replacement for their X-factor.

The name that Dallas front office and their fans would love to see falling to them at No19 is Calvin Ridley. This player is considered the biggest WR prospect in the upcoming draft. Because of this many analysts suggest that Cowboys would have to trade up to get him as he’s touted as a top 10 pick. 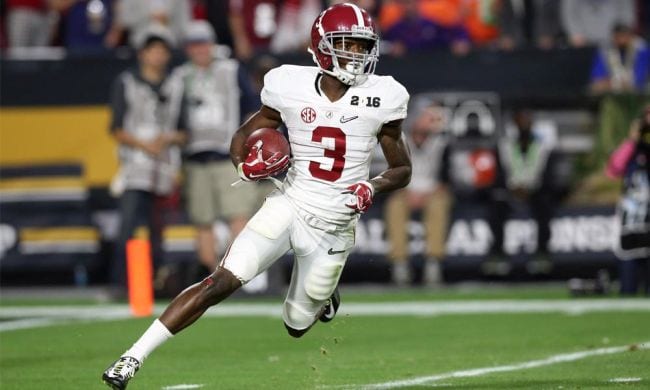 Imagine a scenario where Dallas lands him. There could be a possibility that after that Dez would be released as a post-June 1st cut. But, according to an NFL draft expert Dane Brugler, there is another option: “Dallas is a better team with Dez Bryant on the roster. I’m all for adding Calvin Ridley, but it is because he is the ideal complement to Dez. We can debate whether or not Dez is a No. 1 wide receiver, but I think Ridley is a high-end No. 2 wide receiver and that’s a lot to ask of a rookie to come in and fill’s Dez’s shoes.”

The one thing that can justify Dez’s lack of production would be the lack of a quality receiver on the other side of the field. With someone playing on the opposite side of the turf and which could Dak Prescott target some of the pressure would be taken off Bryant’s back and would boost his performance.

So, if Cowboys manage to draft Calvin Ridley, you can expect for Dallas franchise to field an impressive offense with two game-changers down the field.