If the rumors are real, Kansas City Chiefs will put Marcus Peters on the trading block. When and if this happens, Dallas Cowboys should at least attempt to sign him.

Last year, despite finishing 9-7 Cowboys had a disappointing season. So, changes to their roster are necessary to move this team forward. In the last few years, America’s Team mostly filled their ranks through the draft. They weren’t big players in free agency, nor they traded for commodities on the market.

This is a smart way to do business in the NFL, staying under the salary cap, and developing talent. But, if a player of Peters caliber hits the market Cowboys need to push and try to trade for him. Especially because Marcus brings something to the table that current roster of Detroit squad lacks. 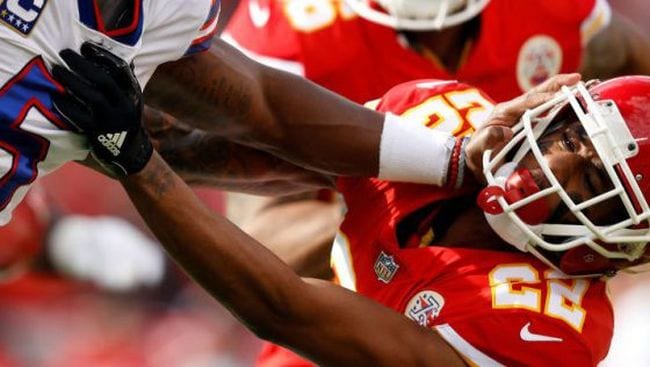 For years, Cowboys secondary was the weakest link in their team. Not only that, they were a unit almost incapable of making turnovers. During 2015 season, their corners didn’t have a pick. In 2016 they improved and had four interceptions. In 2017, despite reshaping their secondary, Dallas cornerbacks again recorded only four interceptions. That’s ten picks over 48 game period.

During the same period, Marcus Peters recorded 19 interceptions. The difference in quality between him and current Cowboys corners is immense, and this stat proves it. That’s why if the opportunity arises America’s Team need to trade for Peters.

The reason why we believe that he’s going to get traded is that Chiefs signed David Amerson, and Kendall Fuller will become part of the team after Alex Smith trade becomes official. If things pan out like this, Big D franchise needs to be in contention for Peters’ signature. The price for a premium cornerback will be high, and Cowboys will need to part way with a decent pick. They could even try to put Orlando Scandrick in the mix.

Regardless of the price, from a pure football perspective, Cowboys need to sign him to become immediate NFC East contenders and repeat Eagles’ SB success.