When we are speaking of college football, an interesting week 3 of the 2016 season is about to happen. A big clash should take place. What could it influence? Nothing special, just the College Football Playoff. The will be played this Saturday between the Florida State Seminoles and Louisville Cardinals.

Things could change a lot after this game. Even though both teams are in the top 10 at the moment, their positions are different. So are the stakes. Florida State Seminoles are ranked No. 2 in both major polls, while Louisville Cardinals are at the 10th place. If the team from Florida manages to win, they will increase their chances of being at the first position in the country. On the other hand, if the team from Louisville, Kentucky, wins, then they will get nearer to the top 5 ranking. At the same time, a loss for either team is not a big thing since it will not eliminate them from the playoffs. Both teams will enter the Week 3 contest with a 2-0 record.

Most probably Lamar is the best player this season. ESPN predicts he will hold the No. 1 spot in the Heisman rankings. But, he does need to make some good things. And, there are few more that are competing for it.

Chad Kelly, a quarterback playing for the team of the University of Mississippi – Ole Miss Rebels did do some damage to Seminoles. But the thing is that he managed to do it only in the first half, the Seminoles fought back in the second.

So far, the Cardinals have played against the University of North Carolina (Charlotte 49ers) and the Syracuse Orange Football (team representing the Syracuse University). These two teams are not that good or talented as Seminoles. On the other hand, Lamar Jackson does look like a top college football player, but who was he playing against so far?

Yes, he did score touchdowns, but he hasn’t played against Seminoles. The FSU team has a lot better defense than the teams from North Carolina and Syracuse universities. One thing is for sure, they will get to Jackson from the beginning. How much is he going to score? Maybe a couple of touchdowns, that’s all. Should that be enough? So far he has 13, and the Cardinals played only two games. Not sure if he is going to make so many again. What will this mean for his Heisman contender status?

This guy born in Miami is also a Heisman contender. Even though he is not the most impressive player so far, he is going for it. It’s up to him now; this match could mean a lot. The opponent is a top-10 team.
Heisman voters do get impressed by the big statistics, but that is not the key. It’s in coming up in the big clashes. Since this is going to be a big match – Cook could get the most out of it. In order to improve on the Heisman list, he needs to be very good.

Yes, Dalvin Cook is a running back, but he can do damage in many other ways as well. For example, when Seminoles played against the University of Mississippi, Cook had 101 receiving yards in the first week, while his team had 91 yards on the ground.

If he manages to collect 150 rushing yards and three total touchdowns, then he is going to climb high in the Heisman rankings, really high.

Another Name to be Brought up – Deondre Francois. How Much to score?

Florida State University has a freshman quarterback in the team. Deondre Francois is his name, and he already has 419 passing yards so far. Plus, two touchdowns. Both stats of these against the team of the University of Nevada, Las Vegas, known as the Rebels. So, he does know how to perform when it’s important. Having Lamar Jackson as the opponent and a freshman quarterback – that could be interesting.

Scoring should not be a problem for the Seminoles; they are completely able to make big numbers. They scored 45 points in the first and 52 points in the second week of the 2016 college football season.

What to expect? The team from Kentucky – Louisville Cardinals is for sure capable of making some serious result. On the other hand, the FSU team will try their best in order to beat the team ranked No.10. The match will be held on Saturday. One thing is very much possible – FSU scoring at least 40 points. 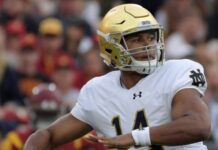