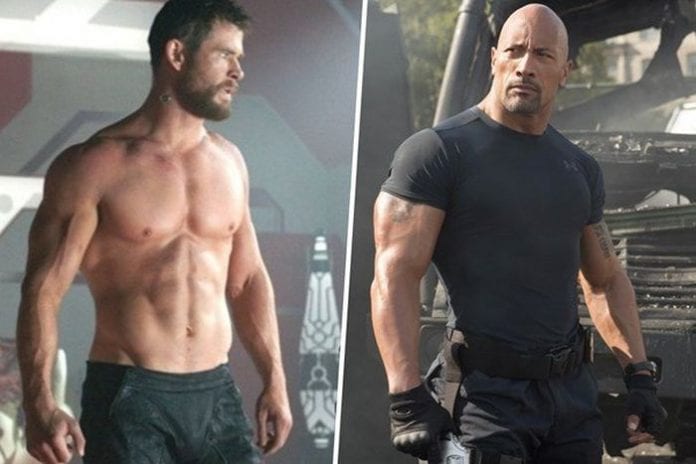 The world we’re living in can be quite a fantastic place to be. Just look at Instagram. Highly popular social media platform has become a battleground for Hollywood’s actors to troll each other. After Chris Pratt was trolled by Dwayne The Rock Johnson a few weeks back, the Rampage star found himself on the other side of Instagram trolling. Now, it was Chris Hemsworth taking a slight dig at the most electrifying man in sports entertainment. We are hoping that this is going to become a trend, as it‘s fun as it can get.

The mighty God of Thunder, Thor, posted an Instagram video in which he imitates The Rock. The video is filmed in a gym, and in it, Hemsworth is thanking China for supporting his latest project Avengers: Infinity war.

In the clip, Chris is saying: “Just taking a leaf out of The Rock’s book, every time he does a post he’s in the gym, so I’m just gonna do a couple of curls while we’re chatting. The film continues to smash records left right and centre. We are gonna keep trying to crank them out for you if you let us, thanks again”

The Avengers superstar wanted to make sure that Dwayne receives the message, so he mentioned him in the video caption: “Avengers now the highest grossing super hero movie of all time, I’ll say again thank you thank you thank you, everyone, for supporting this little community theatre production @marvel @avengers @therock.”

In addition to mimic The Rock’s gym videos he also pointed in the direction of his latest film Rampage, which was put aside when new Avengers film debuted. Rampage was No1 at the box office in April, but there was no place for it there when Infinity War hit the theaters.

But, Johnson knew what was coming his way even before it arrived, so posted a video conceding defeat in advance: “I’m a big boy, gotta strong chin and love a good fight, so AVENGERS hit me with your best shot & knock me out.”

With all the fun Johnson, Pratt, and Hemsworth are having on Instagram and their careers, we are hoping for a joint project. Everything is possible, so we are looking forward to this.

Post midnight workout. Cruisin’ by to show love and gratitude to y’all around the world for the Baby Tiana and RAMPAGE love. And I’m a big boy, gotta strong chin and love a good fight so AVENGERS hit me with your best shot & knock me out 😂💪🏾. Best of luck and congrats in advance on breaking records – it’s GREAT for our business. Everyone wins. Thank you again fans worldwide for the love. Love U back 🌎🤟🏾 #MidnightTraining #WestCoastIronParadise #SweatEquity