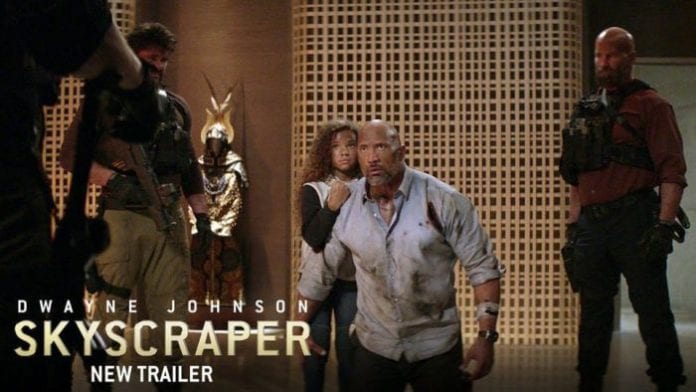 The long-awaited new trailer for Dwayne Johnson’s Skyscraper is out. The movie is an original creation of writer/director Rawson Marshall Thurber, and it has the above mentioned The Rock in the leading role. He plays a former FBI agent who was Hostage Rescue Team leader in the past before entering skyscrapers security business. His latest job includes accessing the security of a brand new skyscraper which is the biggest building in the world, located in China. During his inspections, the building goes on fire, and Johnson must fight for his job, life, family, and to clear his name and reputation.

This film will attract attention not only because it stars box office miracle called Dwayne Johnson, but because it is an original motion picture. It is not a remake, nor it’s based on a video game or comic book. Yes, many will compare it to Die Hard, which isn’t as bad considering how popular Bruce Willis’ film was back in the day. Dwayne Johnson fighting bad guys to save his family sounds like a cliche but the movie is action-packed, and it promises a lot of fun to the audience.

What’s not so great is that this project looks like it was made entirely with green curtains in the back. This claim isn’t far from the truth as People’s Champ, despite his superhero look wouldn’t jump in and out of a skyscraper. But, as we said the movie aims to be fun and thrilling, and we don’t want to pretend that seeing Dwayne Johnson running around surrounded by flames isn’t something we want to look at.

Below you can see the new trailer which gives more insight into what Skyscraper is going to look like. In addition to Johnson, the movie also stars Neve Campbell, Chin Han, Noah Taylor, Roland Møller, Byron Mann, Pablo Schreiber, and Hannah Quinlivan. The film hits the theaters on July 13th, and from what we know about a particular former WWE wrestler it will smash the box office.