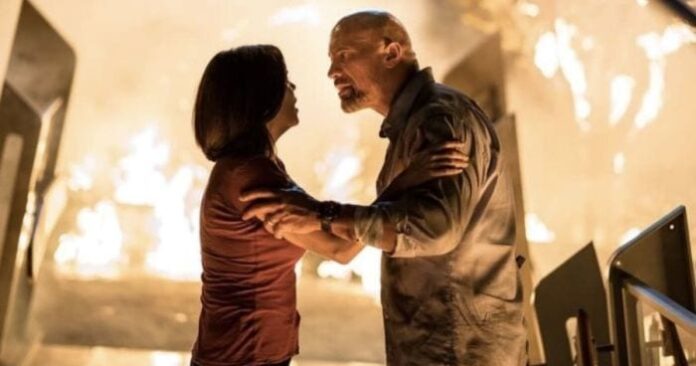 The work never stops if you are Dwayne The Rock Johnson. Now after Rampage is behind him, People’s Champ is going full throttle on promoting his next release, Skyscraper. Dwayne is even going as far as calling this film his most demanding project ever!

According to Fast & Furious star, there’s one more screening to go, and Skyscraper will be ready for its premiere. A new trailer for this movie will be shown later today, as the film closes in on its release date set for July 13th. Yes, it’s Friday the 13th, but this won’t stop Johnson from having more success at the box office.

Making Skyscraper wasn’t an easy feat, and Johnson talked about this on his Instagram profile: “Most physical, emotional and intense role of my career. This and Tooth Fairy. I needed drinks, vacation, and therapy once I wrapped the movie.”

Jumanji: Welcome To the Jungle superstar said that the team in charge of Skyscraper noticed a couple of mistakes together with audience present at the event during the latest screening. Errors that are about to be set right, in order for his audience to have the best experience possible while watching this movie. Including his loyal fans into the process of creating a film is something that separates Johnson from other top brass of Hollywood stars. He’s trying to remain as close to them as possible.

One of the things Dwayne wrote in the caption of his Instagram video reflects this: “Check your ego at the door and create a safe environment for your audience to be real about the aspects they loved in the film and what they didn’t. Most important relationship I have in this business, will always be the one I have with my audience.”

All that is left for us is to wait for the new Skyscraper trailer to be released. Stay with us as we are going to update this post with the video as soon as the trailer hits the YouTube.