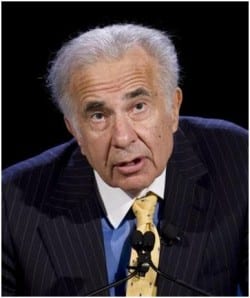 Carl Icahn revealed that he sold out his stake in Netflix, Inc. (NASDAQ:NFLX) after the company’s board approved a seven-for-one- stock split effective on July 14, 2015.

In a message posted on his Twitter account on Wednesday, Icahn wrote, “Sold last of our $ NFLX today.” Bloomberg estimated that the activist investor made a profit of approximately $1.6 billion from his investments on Netflix.

As of March 31, Icahn owned around 1.41 million shares of Netflix based on data compiled by Bloomberg. The total sales price of the Icahn’s stake in the online video streaming company is approximately $960 million based on its current stock price.

In 2012, Icahn purchased his stake in Netflix at an average price of $58 per share. The activist investor profited around $700 on his latest transaction. Icahn generated more than $900 million in profits from selling his Netflix shares in 2013 and 2014. There was period when Icahn owned more than 5.5 million shares of Netflix.

Icahn believed that Apple Inc. (NASDAQ:AAPL) offers a similar opportunity. The activist investor currently owns approximately 53 million shares of the iPhone maker. His stake in Apple has a market value of around $6.8 billion.

Netflix is currently the top performing stock listed on the S&P 500 index this year. The market capitalization of Netflix increased eight times to more than 40 billion since 2012. Over the past 52-weeks, the stock price of the company traded between $315.54 per share and $706.54 per share. The company gained 54% in stock value over the past year. Netflix shares closed $ 678.61 per share, down by 0.38% today

Netflix has been expanding its business operations internationally. Netflix transformed its operations from being just a buyer of shows and movies into a producer with a long-term budget of $10 billion based on its regulatory filings.

Earlier this month, UBS analyst Doug Mitchelson said Netflix will continue to expand globally despite increasing competition from other players in the online video streaming market.  He increased his price target for Netflix to $722 per share from $600, and maintained his Buy rating on the stock.