After a great 2013 of stock gains, many investors have begun to question the strength of the current bull market that began back in 2009. Granted, the US economy has shown highly significant economic recovery in those years, but stocks may be over-reflecting the current economic situation.  According to Forbes, since 1932, the average length of bull markets was 3.8 years.  The current bull market is closing in on 5 years.  Certainly, while there have been three bull markets since 1932 that have lasted longer, 6-9.5 years, they were followed by significant corrections.  With a potential bear market beginning this year or in the next year, investors must think about the fate of the High Flyer Club: Facebook Inc (NASDAQ:FB), Amazon.com, Inc. (NASDAQ:AMZN), Netflix, Inc. (NASDAQ:NFLX), LinkedIn Corp (NYSE:LNKD).

Back in 2000, the technology sector was once again flying high with valuations that did not add up.  Start up internet companies with no profits were being valued at billions of dollars and saw their IPOs skyrocket.  Finally, the market turned over and these names came crashing down, some don’t even exist anymore.  The point is that technology is once again trading at ridiculous valuations.  For instance, Facebook trades at 112 times earnings, Netflix at 219 times earnings, LinkedIn at 682 times earnings, and Amazon with an insane 1369 times earnings.  Now it is easy to see how the High Flyers Club got its name.  While these names have been kind to investors during the duration of the current bull market, it is hard to imagine these names holding up during the next bear market.  Even big time investors, such as Art Cashin, who told CNBC, “I do worry a little bit that we’re beginning to hear things that are reminiscent of the 1999-2000 period”.

Focusing on Netflix primarily, the internet TV show and movie streamer provided a cutting edge service that put former rival Blockbuster out of business. However, several years later and a after a few upward pricing adjustments that hurt its customer base, it appears competition is starting to heat up. Additionally, as notable Seeking Alpha contributor, David White, states “A “growth/momentum” stock needs only to show flat results for a little while before the market destroys its inflated price”.  Mr. White later in his article highlights that Netflix only has about 27% of its potential US market, according to the US Census American Community Survey.  Additionally, the company estimated that its new subscriber for the 4th quarter of 2013 would come in around 2.01 million, which is still only 29% if it achieves those estimates.  The bottom line consensus that David White is arguing is that new subscriber growth has slowed over the past few years and at some point it will reach its maximum potential in the US and the stock’s valuation does not represent that.

Netflix investors certainly know all about volatility and what this stock can do when it comes crashing down.  In July of 2011, Netflix hit a then all time high right around $300. Then Netflix CEO, Reed Hastings, came out and made dramatic changes to its product offering and upping prices.  Hastings was attempting to slowly phase out the company’s CD mailing business because the company’s postage costs were cutting into earnings.  The new product offering was between an unlimited stream only plan that would cost $7.99 a month.  The company still offered its CD delivery, however, you could only receive one CD at a time and it still cost subscribers $7.99 a month.  This means subscribers had to pay about $15.98 a month for its streaming service and CD service, a dramatic jump from the previous $9.99 for streaming and CD. Obviously, customers were upset.

So what happened next to the stock?  It plummeted from $300 to just above $50 in the 3rd quarter of 2012.  SmartStops.net , a risk-based alerting service notified its subscribers back at the $270 range in 2011 that they needed to take some action. And those that did managed to save themselves over $200 a share.  This is a prime example of why investors need to be aware of significant market swings as there is opportunity cost to the outdated method of buy&hold. As how long did it take Netflix to recover back to its $270 level? 2 years!

Netflix as one of the market’s darlings now and a high flyer, can still face significant market correction.  Netflix’s price to earnings shows a way overvalued 217 times earnings and clearly has not taken into account the slowdown in subscriber growth.  As this bull market is starting to show its age,  at some point, the market will shift. Stocks, like Netflix, will be brought back to a more realistic value and investors and traders must be ready to protect their gains. 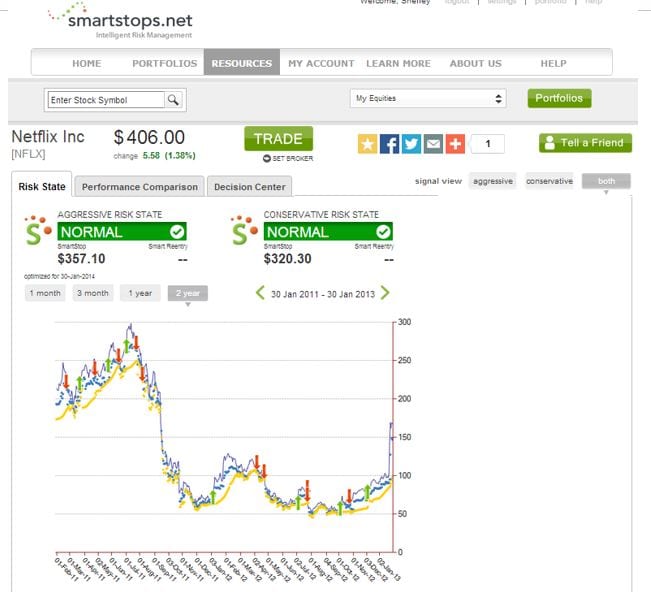