We’ve all seen countless sci-fi movies over the years that depict life outside of planet Earth and it seems that we are getting one step closer every day in making it a reality. We will explore what it takes to place humans on the moon in the 21st century.

With the recent talk about landing men and women on the moon by President Donald Trump back in March this year and with the ever increasing efforts of not only NASA but private billionaires such as Tech-Entrepreneur, Elon Musk and Amazon CEO Jeff Bezos, it seems we are only a few years away from actually colonizing the moon.

Speaking to Time Magazine in July this year, Elon Musk said of his inspiration behind launching a space program: “I think Apollo 11 was one of the most inspiring things in all of human history. Arguably the most inspiring thing. And one of the most universally good things in history. The level of inspiration that provided to the people of Earth was incredible. And it certainly inspired me. I’m not sure SpaceX would exist if not for Apollo 11.”

Our friends at Betway have created a nice infographic below that shows what lunar living will look like for people seeking to live on the moon. Until such day, NASA is working hard on getting its Artemis moon program which will see astronauts land on the south pole of the moon in the year 2024, as such they are in the midst of creating a new Advanced Space Suit also known as the xEMU, which will be tested by the year 2023 in orbit. This new space suit is pivotal to allow humans to gravitate towards the moon as opposed to its older space suits that mean astronauts float around. 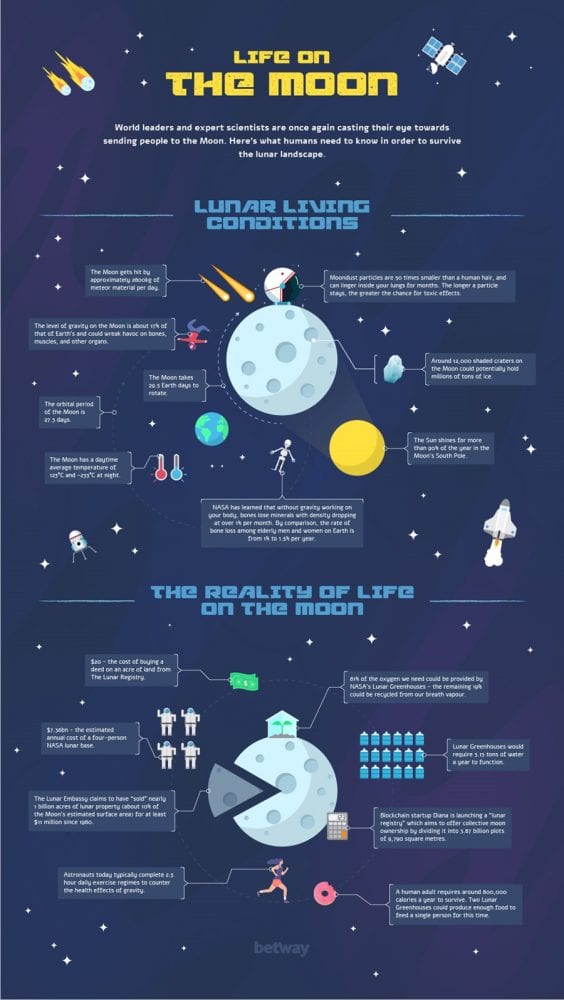 Speaking to the press earlier this month at the American Astronautical Society’s Wernher von Braun Memorial Symposium in Huntsville, Alabama, NASA spacesuit engineer Lindsay Aitchison said: “We’ve made a lot of progress and iterated on this design, so now we have a very mature system overall. “This follows more than 30 run tests at the Neutral Buoyancy Laboratory, a swimming pool designed for space simulations for astronauts.

Aitchison added that: “NASA has actually been investing in a very methodical matter how we’re going to do exploration spacesuit development,” with the xEMU suit having a much smaller display unit on the front of the suit, and so enabling it to be easier to fit on more of NASA’s astronaut pool of people.

What does it actually take for a human to live on the moon? Is it even possible to do for more than a year? We’ve gathered some research and found that a person eats roughly 1,095 to 1,825 pounds of food every year, but we would need even more to maintain a healthy diet on the Moon. This is because that just living on the moon will burn a person around 300 calories per hour, three times the amount it does and the Earth!

As for the low gravity levels on the moon, well that won’t help either, as a human would need to complete two daily two-and-a-half-hour workouts just to maintain bone mass, muscle strength and heart performance.

Therefore, although we might get humans on the moon, it seems that we are far away from making it a comfortable stay and a lot more research needs to be done to even remotely replicate the life we have on planet Earth to the life we may want to have one day on the moon.

How Risky is it to Buy Expensive Cryptocurrency?