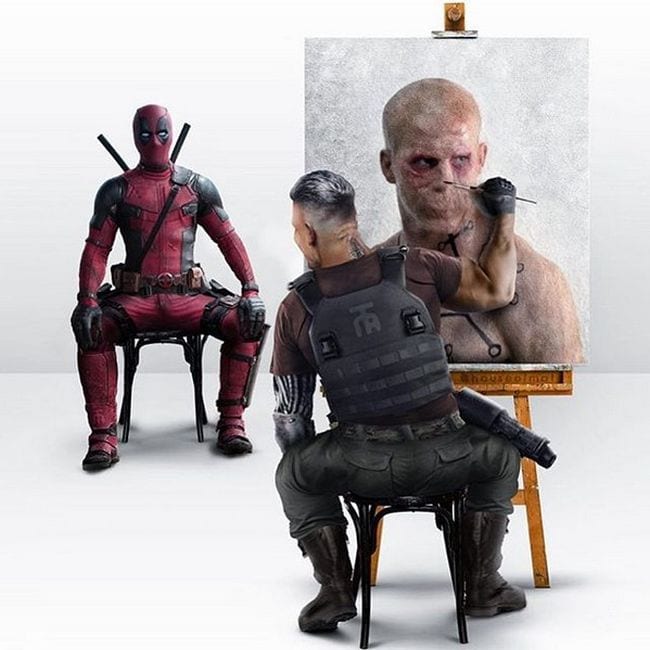 If one is asked to name a celebrity who is teasing antics on social media, they would definitely pick Ryan Reynolds. Up to this date he has been well known for his having online fun, and it started long before Deadpool. This time he took his game to another level with his colleagues by uploading teaser images and photoshops of them in their characters from Deadpool 2.

The latest photo he posted was a ‘painting’ inspired by Norman Rockwell. What looks like a Deadpool painting Cable is actually a prankster wearing a costume painting Josh Brolin back from the days when he starred in the Goonies.

This inspired some fans to up the game. ‘HouseofMat,’ Instagram artist has come up with a series of images sparked by the original parody. He switched the roles, so that now Cable is painting Deadpool, but not the one we would like to remember – he chose the one from  X-Men Origins: Wolverine.

There are numerous supporters of these posts, such as Rob Liefeld. He even shared the image on his page and wrote that those guys and their photoshop skills never ceased to amaze him and praised their work.

We couldn’t agree more that HouseofMat does have much talent and a great sense of humor indeed, so don’t hesitate to check out the rest of his witty and hilarious images on his Instagram page. The Rockwell-esque motif he toys with is definitely worth your time.

As far as the release date for Deadpool 2 is concerned, it will come with your favorite season of the year – spring! We can expect it in May and look forward to its amazing cast, including Ryan Reynolds in the role of the titular character, Deadpool, Josh Brolin starring as Cable and Zazie Beetz in her role of Domino. There will also be T. J. Miller, Brianna Hildebrand and Morena Baccarin returning for their parts.