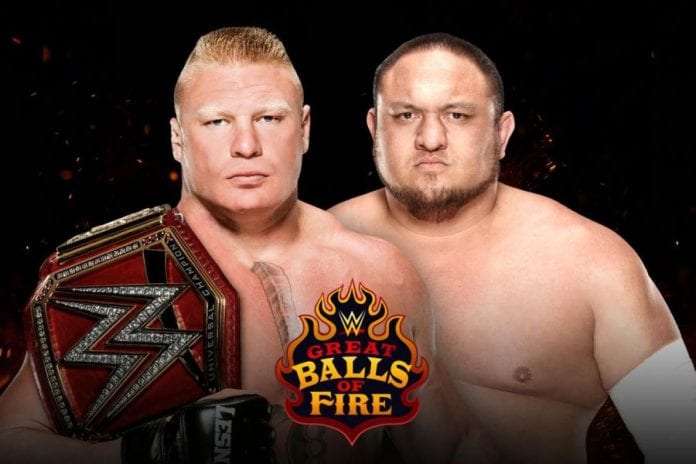 In the main event of the evening, this Sunday at the Great Balls of Fire pay per view event, Brock Lesnar is going to defend his Universal Championship for the first time since winning the belt at Wrestlemania 33. This is going to be a great match between two legit monsters that Monday Night Raw has on their roster. Will Samoa Joe surprise everyone by winning the gold or will Lesnar retain the title just like many people expect him to?

This feud has been great so far. Samoa Joe has been made to look like a true superstar. The company has protected him well and made him get the best of Brock on multiple occasions while keeping Lesnar strong. WWE writers have done an amazing job with these two, and that is something that you don’t see very often.

The segment that started off this feud is one of the most successful WWE videos on Youtube, which clearly shows just how much the fans want to see this duel happen. There were even reports that The Beast Incarnate himself is pushing for this feud to continue after this Sunday. Whether or not that will happen depends on the kind of match they have this Sunday as well as if the rumors of Reigns going up against Lesnar at Summerslam are true.

If they are, the feud will end this Sunday with Samoa Joe looking good in the match, but losing clean to the Beast Incarnate. On the other hand, if the WWE plans on keeping this feud rolling, we can see the fight ending in some kind of DQ or double count-out or Samoa Joe winning by DQ and the title remaining on Brock Lesnar. Our pick is that Brock will keep the title, but it will be interesting to see the way he does it.