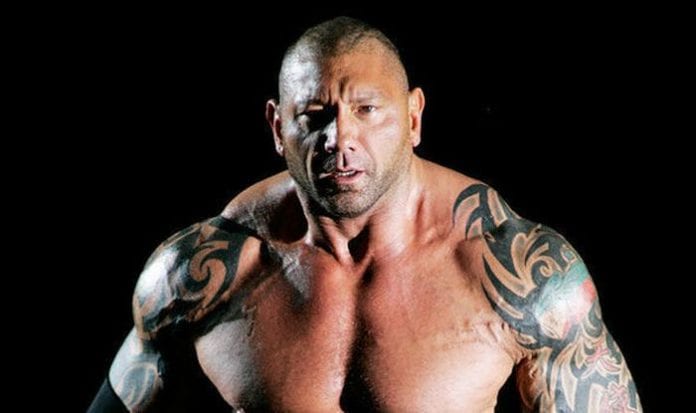 The big guy just dropped some big news. Batista will retire from wrestling in 2019. It’s not clear if the WWE had any plans of bringing him back after The Beast moved to Hollywood full-time.

In a most recent interview, The Animal said that that the biggest company in wrestling had plans of pairing him up with former UFC star Ronda Rousey. They should have been the tag team to face Triple H and Stephanie McMahon at Wrestlemania 34. The six-time world champion added that they replaced him with Kurt Angle before the show without giving him an explanation.

During the same interview, he once again stated that he has no plans of wrestling after he turns 50. Talking to Chad Dukes of 106.7 The Fan Batista confirmed this: “I told them next year would be my last year. I’m turning 50 next year. I’d be willing to… I feel great. Physically. I’m in great shape. I’ve never let up on that. But I just don’t want to be the old guy in the ring, and I don’t want to overstay my welcome.”

Dave was sincere as ever, and he continued the interview by saying: “I just want to end my career the right way and next year will be the last opportunity, so if we can’t make something happen by next year, then I’m just gonna officially hang it up.”

If things go Batista’s way, he will end his wrestling career with a Wrestlemania match versus Triple H. Him vs. the Game is what Dave wants for great closure. The two of them had a legendary duel at Wrestlemania 21. The feud ended with Batista winning the World Heavyweight Championship. This match was the one that established him as the main-event wrestler.

Even if he doesn’t return to the ring before he turns 50, Dave has plenty on his table. Since transferring from WWE to Hollywood in 2014, he landed roles in projects such as Spectre, Avengers: Infinity War and The Guardians of the Galaxy franchise.