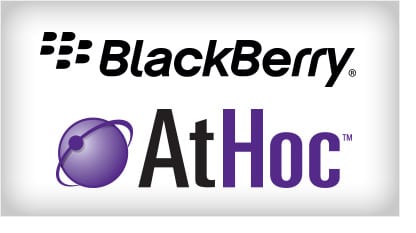 BlackBerry Ltd (NASDAQ:BBRY) has announced that it has completed its acquisition of AtHoc, a crisis communications provider.

AtHoc will now run as part of Blackberry. The acquired firm will still have is Chief Executive Officer Guy Miasnik at the helm of the firm which will now operate as a division of the parent company (Blackberry). Mr. Miasnik will in turn report to Blackberry’s CEO and Executive Chairman, John Chen.

The AtHoc software system lets organizations, individuals and devices exchange information securely and in real time. One of the major advantages of the software is the fact that it supports multiple platforms including Android, iOS, Mac and PC desktops. It also supports IP phones, sirens, fire panels, speakers and digital displays. The system is ideally set up to optimize situational awareness. The elaborate nature of the company’s software and its operations has earned it the recognition it deserves.

Gartner, an industry analyst described the firm as an industry leader. AtHoc was also rated as the firm with the highest rate of preparation and the go to firm for mass/emergency notification services.

AtHoc is a very strategic acquisition for Blackberry because it will help the mobile tech company to achieve its goal of providing secure communication solutions. Blackberry will integrate the technology and expertise of AtHoc to boost the level of performance especially through the Blackberry enterprise systems. This will allow Blackberry to speed up its targets as well as giving it an edge in the new market.

The acquisition is also advantageous for Blackberry because it will assimilate AtHoc’s customers on its services. AtHoc’s customer base expands to a global scale. Some of its biggest clients include government agencies such as Homeland Security and the US Department of Defense. Multinational corporations are also part of the mix. The acquisition will thus create a big impact for the company in terms of spreading its software solutions and its mobile ecosystem. The overall expected effect is a geared up economic performance for Blackberry.