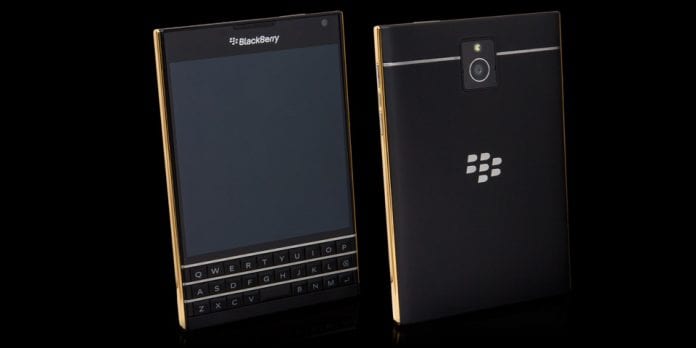 BlackBerry Ltd (NASDAQ:BBRY) (TSE:BB)’s premium flagship device, Passport, was recently offered by the Canadian smartphone maker in limited-edition black and gold Passport versions. However, the devices quickly sold-out leaving fans upset, but now the opportunity of owning one is being offered on eBay, according to a report from Mobile Syrup.

Blackberry limited-edition black and gold Passport is offered for a starting bid of $4,960.59 (CDN) by the seller ‘hachem.k.’ The price quoted on eBay by the seller is way higher than the original price tag of $999.

BlackBerry Ltd (NASDAQ:BBRY) (TSE:BB)’s Limited-edition Passport was available with gold plating on the frets and frames in very limited quantity i.e. 50 only. BlackBerry Passport offered for sale on eBay is the 45th of 50 such devices as claimed by the seller. The seller, further, says that the device will come with all its accessories, and the original packaging as well. “You will also get the bundled Valextra Black Leather Case that BlackBerry shipped with this rare model,” says the seller.

BlackBerry Ltd (NASDAQ:BBRY) (TSE:BB) had no plans of making more than 50 units of the coveted gold device, but seeing its popularity it is very much possible that the company may soon introduce few more units in the market. But if anyone, does not want to wait, and is willing and capable of paying five times more then he or she may opt to buy on eBay. Also, gold-version of the Passport device is already offered at a price of $1000 by Goldgenie, a third-party company that specializes at customizing high-tech products with high-end materials.

The 4.5-inch device is available in white, black and red colors (and now in gold). The device is square in shape with an HD touchscreen having 1440*1440 pixels. The device runs on the BlackBerry 10.3 OS, and is powered by a 2.2 GHz quad-core processor. It has a RAM of 3GB and inbuilt storage of 32GB. The smartphone, which is 4G-ready, has a 13 MP camera that comes with an optical image stabilization and video recording at 1080p. The unlocked version is available for $699.99, and the business professionals are the primary target for marketing by the company.