The market share of BlackBerry Ltd (NASDAQ:BBRY) (TSE:BB) is still going downwards, but it was able to maintain its position in the United Kingdom.

A report from market research firm Kantar showed that the Canadian smartphone manufacturer’s operating system remained the third most popular in the United Kingdom behind iOS of Apple Inc. (NASDAQ:AAPL) and Android OS of Google Inc (NASDAQ:GOOG) (NASDAQ:GOOGL).

Based on the chart above, the total installed based BlackBerry Ltd’s (NASDAQ:BBRY) (TSE:BB) smartphone operating system still surpasses the Windows Phone OS of Microsoft Corporation (NASDAQ:MSFT) from March 2004 to March 2014.

Although the Canadian smartphone manufacturer was able to maintain its market position for a decade, it is important to take note that the popularity of BlackBerry OS in U.K. is dwindling. As of April 2014, the UK smartphone OS market share of BlackBerry Ltd (NASDAQ:BBRY) (TSE:BB) was only 1.6% compared with the 9.5% share of Windows Phone OS as illustrated below. 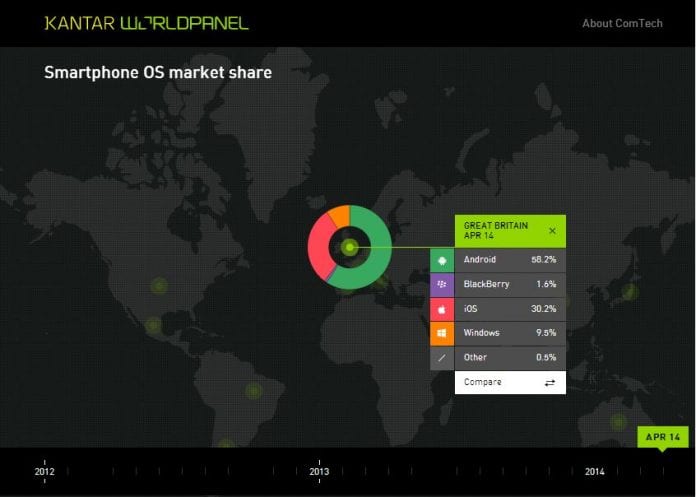 The Canadian manufacturer may not be able to keep its market position as the third most popular smartphone OS in the region given the fact that Windows Phone 8 is gaining momentum unless it can turn its situation around with a compelling and disrupting BlackBerry phone that could convince its existing users to stay and attract new users.

On the other hand, Microsoft Corporation (NASDAQ:MSFT) showed that it has the ability to build Windows Phone as a mobile brand although it is facing a very strong competition from Android OS of Google Inc (NASDAQ:GOOG) (NASDAQ:GOOGL) and iOS of Apple Inc. (NASDAQ:AAPL), which hold the top and second positions in the smartphone OS market share, respectively not just in the United Kingdom but globally.

At present, BBM Protected is only available on BlackBerry Phones, but it will be available for iOS and Android devices by the end of year, according to the Canadian smartphone manufacturer.

Zekeria Oezdemir, technical director at NovaLink commented, “We’ve been testing BBM Protected on behalf of our customers and have been impressed so far.BBM Protected is the ideal solution for our banking and insurance customers who have increased security needs.”

BlackBerry CEO John Chen is focused on utilizing the advantage of the company in providing security for mobile devices as one of its turnaround strategies. He is confident that BlackBerry Ltd (NASDAQ:BBRY) (TSE:BB) is well-positioned for the future. Chen is well-known as turnaround specialist.