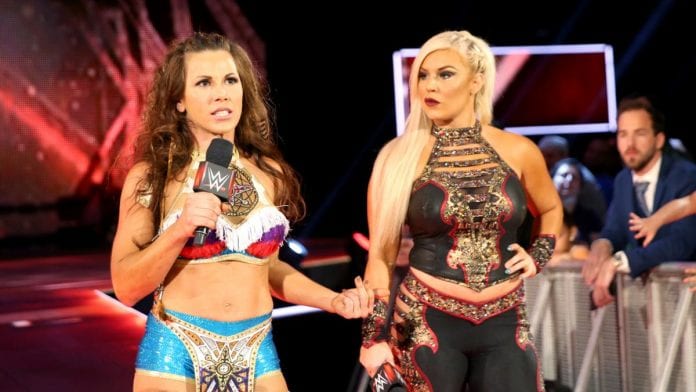 After the company learned of the injury news for Bayley, two triple threat matches were set for this week’s edition of Monday Night Raw where the winners would face off next week on Monday Night Raw in order to determine who is going to take Bayley’s place as the number one contender for Alexa Bliss‘ Women’s Championship at Summerslam. A new opponent is needed and that is the goal of this battle that is going to happen next week.

In the first match, we have watched Alicia Fox, Emma, and Sasha Banks battling it out. Even though Emma looked good in this fight, it was strange to see that she was the one to get pinned by Sasha Banks, who was the clear-cut favorite to win this first spot in next week’s match.

A second match looked even more predictable than the first one as we had two women that had no shot of winning the match. Of course, Mickie James and Dana Brooke are not going to be the ones that will stand tall above Nia Jax. In the match number one, we could have at least talk about Emma maybe coming out as a winner. Here, it was really no doubt about that Nia was going to win.

That means Jax and Banks will face off yet again next week for the number one contender’s spot. Many fans would say that Sasha was supposed to be the one against Bliss at Summerslam in the first place so they don’t really mind the fact that Bayley is out because of an injury. She is definitely the favorite in the matchup as WWE likes to have that face versus heel dynamic.