Brock Lesnar is one of the biggest superstars that WWE has had in the past 10 years. There is a reason that they are paying him big bucks to appear on just a few shows a week. He is drawing a lot of people to follow the product as he has been the UFC champion and people know who he is.

When an average fan looks at him, he can see somebody that is as legit as anybody in the combat sports. That is why WWE is always putting him in the best position possible and are treating him like a special attraction. When he is in the ring, you know that something big is going to happen.

Right now, we know that he is likely going to lose the title to Roman Reigns. What is more important is the fact that Lesnar is aware that he will lose the belt. That is what sources near the situation are reporting. 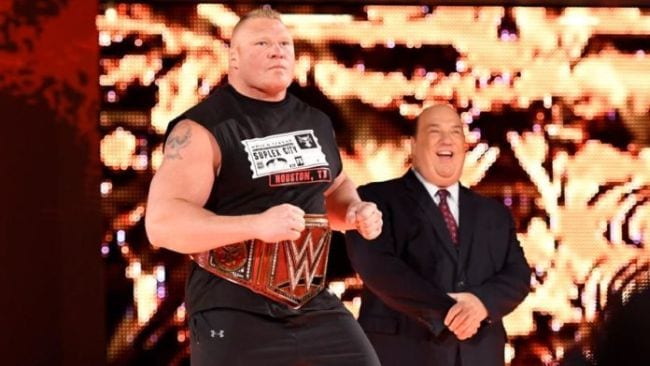 This guy was booked to be on the latest edition of Monday Night Raw, but he hasn’t made an appearance. Many were wondering why he and Heyman didn’t appear on the show and the reason is that Lesnar’s contractual dates are over and that he didn’t have to be there. He is also booked for the Live event this weekend, and he is going to appear there.

Multiple reports are saying that Lesnar is more concerned about working on a new deal rather than being a team player and focusing on getting the job done at Mania. Brock wants to get paid. That is how he has always been. UFC might also knock on the door once his deal is done, but we don’t know what Lesnar is interested in doing right now. According to a recent interview with TMZ, his agent Paul Heyman stated that all doors are opened for Lesnar and that Brock is physically ready for any challenge both with WWE and UFC. Quoting: “Brock Lesnar does whatever Brock Lesnar wants to do.”