You would think that a guy that has been forced to retire because of the injuries would be eased back into the in-ring action once he got cleared to wrestle again. Well, think again because this ain’t your average joe wrestler. It’s Daniel Bryan, a guy that loves this business with all his heart and a guy that is one of the most over people in the company in this century.

As soon as he got cleared, he got back to wrestling against all of the Smackdown Live superstars. It’s like he never left the ring. After Mania, he has been on the WWE TV every single week doing something. The company even had the guts to put him at the number one spot in the biggest Royal Rumble. Needless to say that he was in there for a very long time while taking a huge beating.

We got to give it up to Daniel Bryan, he is going all out and trying his best to put on the best match possible. Before he made his return at Mania, it was believed that he was going to have a lighter schedule, that he was only going to wrestle on special occasions. Something like Ronda Rousey is doing right now.

But, according to the reports, Daniel Bryan is going to be working a full-time schedule. He is being booked for all the house shows for the blue brand, and he is also on every single poster for Smackdown Live shows on Tuesday Nights.

The leader of the Yes Movement wants to make the most out of his in-ring return and out of his career with the WWE. That is why he is going all out right from the getgo. 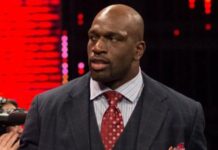