There were rumors that Paige was going to make her comeback to Monday Night Raw a week ago and that she was going to be named the fifth member of the Women’s team at the Survivor Series. Even though those were the original plans, WWE went in a different direction and decided that they are going to have Bayley at the show.

The Anti-Diva had to wait another week to make her return to the ring and set everything for her first appearance in 2017. During the fatal four-way Women’s match that was set up to determine who is going to be the number one contender for Bliss’ championship, Paige’s music hit and everybody went crazy.

She received one of the biggest pops of the year as the fans were really happy to see her after more than a year that she had to miss because of the neck injuries that she suffered.

Paige made a huge statement with Mandy Rose and Sonya Deville, two wrestlers that made their main roster debut tonight when they helped Paige take out Sasha Banks, Bayley, Mickie James and Alicia Fox.

This was a good sign that Paige is going to be a heel on the main roster. We will still have to wait to see her next week and the kind of character that she is going to present, but right now, she seems like a villain.

After the match, Paige was joined yet again by Rose and Deville when they found Alexa Bliss, Raw Women’s Champion and took her down backstage. Does this mean that Paige is going to challenge her for the championship at the WWE Roadblock pay per view? We’ll have to wait and see which route WWE is going to take when it comes to the Women’s division. 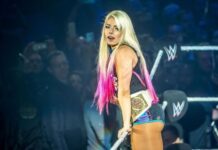 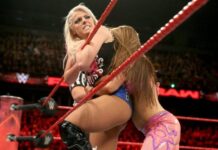 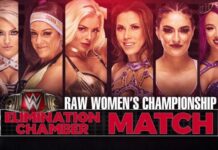