Speaking different languages fluently has never been a more valuable skill in the job market. While the world is as large as ever, the way we access information and converse with one another has shrunk considerably.

Digital communications and global companies that span across different rules, procedures, and languages are becoming the norm, which places polyglots (fluent speakers of multiple languages) in an advantageous position.

If you’re interested in pursuing a new career or getting the most out of your unique area of expertise, these are some of the best jobs for polyglots on the lookout for a new career.

Of course, the go-to job for a polyglot would be translation. But be sure you’re aware of what the job actually entails. Tasks in the translation world are varied, so no two days will be the same. Monday, you may be polishing up a website, and Tuesday you could be guiding others on an econference from global-lingo.com.

It’s not merely a case of a copy and paste translation. You’ll need to be aware of the flow or cadence of a translated website or brochure. You’ll also need to keep a keen eye on terms and phrases that just don’t translate well, and how that affects the overall message of the company you’re working for.

Translators are storytellers at heart, but they’re also expected to be customer service ambassadors, narrators, and good at developing relationships. These multiple responsibilities ensure that translators are always keeping the bigger picture in mind when translating content and communications.

If you’re fond of both written and verbal communications to create an understanding and deliver results between two parties, then becoming an interpreter could be the logical step.

Whether you’re working in a police station, a school, or helping to get an important business meeting on its feet, you’ll be the bridge between two cultures, helping each side communicate their needs and concerns for an amicable outcome.

The interpreter is usually the only person in the room who knows what both sides of the room are saying, so you’ll need to be adaptable to any situation and have a solid attention span. You could be working out the small print between two companies,  or translating for a large online global audience.

If you have a cool head in potentially hostile negotiations or have a knack for diffusing difficult moments by thinking on your feet, this could be the career for you.

If you’re looking for a more rewarding role that nurtures, inspires, and educates others then teaching a foreign language could be a great place for your polyglot skills to thrive.

In general, a native speaker of the language being taught is the preferred kind of teacher. Of course, that’s perfectly understandable, as they’re more prone to pick up on certain colloquialisms that don’t translate well, and learners may feel more comfortable with having them lead the class.

However, many non-native teachers have succeeded in this sector, and support roles for native-speaking teachers are in high demand. Staff support roles can ensure that you’re both covering valuable ground from both perspectives to the benefit of all your students.

If your language skills are being wasted and you’re looking to be the best you can be, a career in military linguistics might be just the challenge you’re looking for.

However, you’ll need a good healthy competitive streak to make it to the final application stages. Large numbers are invited to try out, but only a select few make it to the very end.

Human intelligence operatives are priceless to military defense and strategy. You’ll be expected to provide detailed accounts of enemy data and offer insights into the intentions behind it.

Not only will you be communicating information to other officers, but you’ll also be collecting intelligence via interrogations, interviews, and debriefings.

Cryptologic Linguists focus more on the deciphering of foreign language broadcasts and other sources of information. If you enjoy problem-solving and detecting information, a career in analyzing foreign communications may be perfect for you.

While a military linguistics career can be financially rewarding, it’s certainly not for everyone. Both roles require a calm and analytical mind that thrives under pressure.

For adventurous polyglots who don’t relish the idea of military service, why not travel the world as a tour guide?

This career is custom-made for linguists who like to hop around the globe. If you’re well-versed in the customs and history of your respective other languages, or if you’re a native speaker looking for a little excitement, tourism could be the perfect next step for you.

You’ll need to be adaptable to sudden changes in circumstance, and be very good at keeping a smile on your face when holidaymakers are having a bad day, but if you have sound local knowledge and a friendly disposition, you’ll go far.

By no means is this list exhaustive. When you’re a skilled polyglot, your career options are as broad as your ability to speak multiple languages and communicate well.

When you’re next polishing up that resume, just make sure that you’re multilingual abilities are highlighted well enough to get noticed by your dream employers.

After all, putting your language skills to good use when pursuing a new career says ‘you’re hired’ in any language. 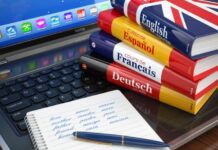 How To Learn A Foreign Language In 6 Months