Things like the Royal Rumble and Kind of the Ring are kind of the concepts of the old era. Rumble is for sure still one of the biggest events of the year, and the fans love to see it every January, even though we have had this type of matches for over 30 years now. On the other hand, Money in the Bank battle is the concept of the new era. What they have in common is that they are really exciting to watch and that they can make or break a superstar.

Last year, when everybody found out that MITB PPV was going to be an SD Live branded event, the first name that came to everybody’s mind that can win the match is Baron Corbin. Usually, heels win the briefcase since winning the title by cashing in is kind of a tactic that suits the villains.

Well, that was exactly what happened, he won it and became Mister Money in the Bank, and the guy that is likely going to be the next WWE Champion.

Or, at least we thought that he was going to become one. WWE surprised everybody when they decided that he was going to fail his cash in. Some feud on Twitter got him in trouble, and he lost the match to Jinder Mahal of all people, who was beaten up by John Cena a couple of minutes before that.

Baron Corbin recently talked about that and when the decision was made that he was going to cash-in and fail.

“It was kinda like an hour before (SmackDown Live). We discussed, and then they made a decision that was going to be the night. It didn’t work out, but, yeah it was definitely about an hour before. I mean, it’s the fun part of the business. You never know what your day is gonna hold. Something could be very, very last minute. It could be at that very last second. So, it’s pretty wild, and it keeps you on your toes. That’s for sure.”

Baron Corbin sounded pretty positive about the situation, but there is no doubt that he was shocked when he learned that the cash-in was planned to fail. 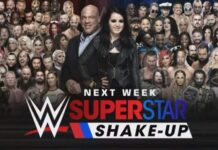 Most Meaningless Moves For Raw In Superstar Shakeup