Created and produced by Fresh TV, “Backstage” is a Canadian teen drama series which debuted on Family Channel in Canada on March 18 last year, and only a couple of days later it was released in the United States as well, on Disney Channel. The final episode aired in December 2016, but it was months before that (at the beginning of May 2016) that DHX Media and Fresh TV picked up the drama for the next season, which will comprise thirty episodes, just like the first one.

The fact that they decided to confirm the renewal only a month or so after the “Backstage” release came as no surprise since the series received international acclaim and positive television ratings. It has been reported that the first season attracted more than one million viewers (to be precise, 1.23 million). On IMDb, the drama holds a score of 8.9 out of 10, while on Common Sense Media it has a rating of 3 out of 5 stars.

The main characters in “Backstage” are the students of Keaton School of Arts, a fictional performing arts school. These talented dancers, singers, musicians, in a word, artists, face various problems typical of their age while trying to make their dreams come true and handle the pressure of constant competition. In spite of being each other’s rivals, they also become friends along the way and help each other deal with all the difficulties they encounter.

As previously mentioned, what we know for sure for the time being is that the series will definitely be renewed for Season 2, which will air on Family Channel. The new season is expected to come out sometime this year, and we assume there will be no major delays. However, the exact release date has not been announced yet. Follow us, and we’ll let you know as soon as we find out more details. 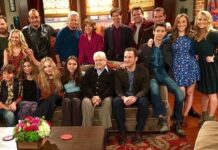