Opptrends 2022
Home Technology Apple, Fox News and ACLU part of the team in support of...

Microsoft is currently involved in a fight with the Justice Department over the use of gag order and it seems like they have managed to get help from their peers in the tech business and other industries. The fight between the two which started back in April after Microsoft had filed a suit against the government over the use of gag orders by the Justice Department. The tech giant claims that the orders are not constitutional.

In a legal filing they presented, the company said that the government should not have the authority to prevent companies from telling users that their information and accounts are turned over to investigators. These gag orders are mostly used in cases of national risk such as terror cases and investigations.

The EFF writing in a blog post commenting about the filing said that if the electronic searches were done privately then they would lose the ability to challenge the legality of law enforcement invasions of their privacy. Senior staff attorney Lee Tien said that the Fourth Amendment did not allow such actions and the government was now supposed to act in a way respectful of the Constitution.

Other companies to have filed a brief in court included tech heavyweights Apple and Mozilla. The two firms went in arguing that the gag order would hurt American businesses overseas considering that in other places such as Europe, disclosures in such cases was vital and important. On its own, Apple indicated that they had received close to 590 gag orders which they labelled as unlimited or indefinite duration.

Twitter also sent in a brief and they argued that they had been sent over 6,432 orders to hand over data of people being investigated and it noted that at least 51 percent of the times there was a gag order accompanying it. Half of the gag orders are also said to have been for an indefinite period. Twitter said that the standard for gag orders which was being made was so low that in most cases it was being met and that gag orders usually stayed most of the times when they were put in place.

Other signatories which are fighting against the gag order included varied companies such as Alaska Airlines, BP America, Getty Images, GlaxoSmithKline, and the US Chamber of Commerce. Other signatories include the Associated Press, the Seattle Times, the Washington Post, NPR and Fox News. 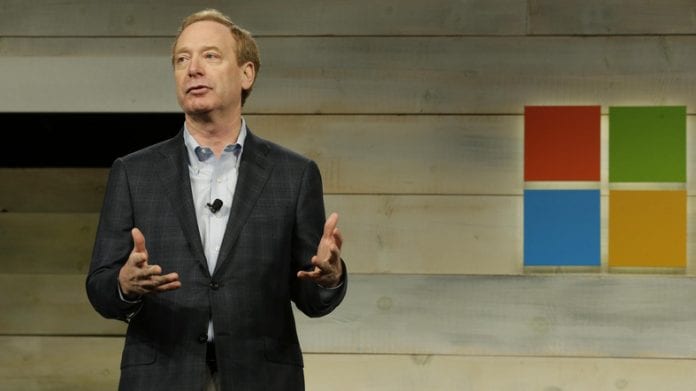 The coalition is clearly of varied companies which are in different sectors and industries but they have all been joined in their fight against the use of gag orders. Remarking on its supporters and how some of them don’t see eye to eye, the Microsoft President and Chief Legal Officer said that they were grateful for the support from the 80 organizations all of which presented diverse views. Smith jokes about how it was rare to find Fox News and ACLU on the same side of matters these days.

Smith also noted that they believed that the constitutional rights which were at stake in such cases were fundamental and people had a right to know when their accounts and details are accessed.