Opptrends 2022
Home From The Press Amazon Prime Day: Customers Having Problems with Checkout

The thousands of Prime Day deals are available exclusively for its Prime members. However, non-members still have the opportunity to shop for deals by joining the Prime subscription program since the e-commerce giant is offering a 30-day free trial. They can cancel their membership anytime.

Amazon kicked-off Prime Day at 3:00 AM, but six hours later, shoppers started complaining and tweeting that they can’t buy anything and missing the deals they’ve been waiting for. Shoppers who are complaining use the hash tag #PrimeDayFail. 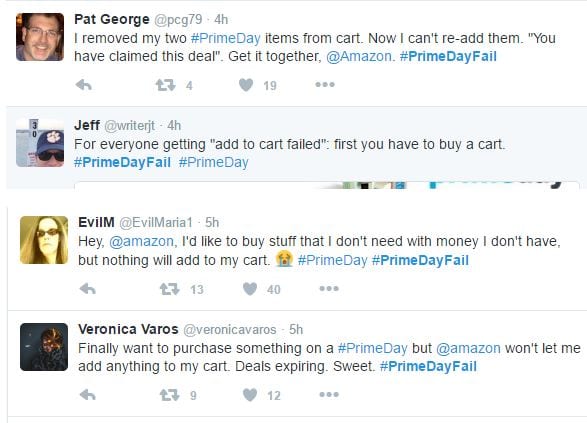 The e-commerce giant confirmed the problem before 9:00 AM EDT through a message posted on Twitter (NYSE:TWTR).

“Some customers are reporting difficulty with checkout,” Amazon said in a Tweet. “We’re working to resolve this issue quickly,” tweeted Amazon.

Additionally, Amazon spokesperson Ana Rigby e-mailed Bloomberg and explained that the problem involved Lightning Deals, but it had been resolved.

The Prime Day 2015 helped Amazon increase its revenue by 2% in the third quarter. Its Prime membership also increased by 5% last year.

James Cakmak, an analyst at Monness, Crespi, Hardt & Co. believed that the Prime Day 2016 will serve as a tailwind for Amazon despite the technical problems.

According to him, “It will serve as a tail wind for the third quarter. You have a perfect storm heading into the day, and while technical difficulties may get in the way in the short term, it shouldn’t affect revenue.”

On the other hand, Wedbush Securities Analyst Mike Pachter viewed the technical problems as a sign that Amazon is experiencing tremendous demand from shoppers.

“The biggest cloud manager on the planet having issues? That’s a testament to high demand and high expectations for reliability,” said Pachter in an e-mail to Bloomberg.