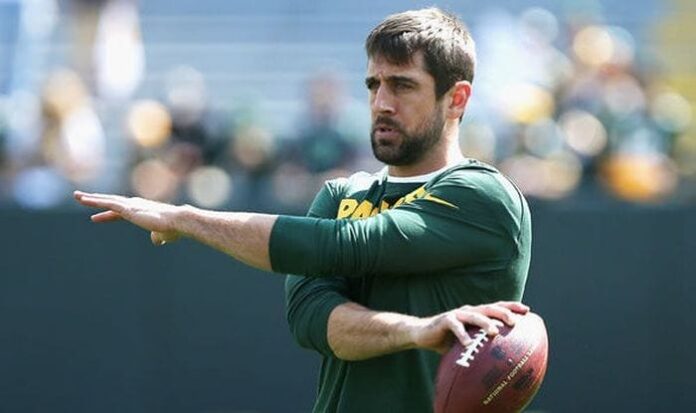 When Dallas Cowboys released Dez Bryant, many believed that he would have a market, but things turned out differently. After Dez rejected a three-year $21 million deal from Baltimore Ravens, no other franchise offered him a contract. People still believe that he will sign with a team before 2018 season starts, but so far there were no developments.

Some sources claimed that interest from Green Bay Packers exists but that’s not the case. Packers don’t have a need for a WR, and they even released their veteran wide receiver, Jordy Nelson. GB quarterback Aaron Rodgers doesn’t believe that his team needs a receiver of Bryant qualities.

In a recent interview NFL’s best QB said: “I don’t know why you’d cut Jordy and bring in Dez, but he’s a talented player. He’s going to end up somewhere. If he ends up here, we’d obviously welcome him with open arms.”

These statements aren’t surprising as Rodgers was disappointed that Packers released Nelson before consulting him. Jordy was Aaron’s favorite target during his tenure in Green Bay, and they probably won’t sign Bryant as a replacement for Nelson as it would irritate their star QB.

The opinion of Aaron Rodgers is different from what Jason Witten stated a few days ago. Talking about Bryant’s future his former teammate, and Dallas Cowboys legendary TE said: “I think Dez is certainly going to have some great opportunities. He’s motivated, and I think he’s going to end up going to the Green Bay Packers. Rodgers, he throws that back-shoulder throw so well, and Dez has great chemistry with a good quarterback that can put the ball wherever he wants. Because I still believe Dez can high-point the football as good as any other wide receiver in the National Football League.”

We also believe that Dez Bryant will have a future in NFL, but not with Green Bay Packers. Reading between the lines what Rodgers said, he obviously doesn’t want Dez in his house. Despite releasing Nelson without his consent, we believe that he has a saying in Bryant’s signing, and it just won’t happen.