Did you recently make a new career move, but now you are starting to regret it? Whether it is caused by annoying co-workers, a toxic environment, or is it because of the company’s scandals or dropping stocks, many people who are in the tech industry regret accepting the job in the first place.

The people in the tech industry were asked to respond with „true“ or „false“ to this statement – I regret accepting my job at my current company. And here are the results:

The results were also broken down by companies with at least 100 employee responses. And here are the results: 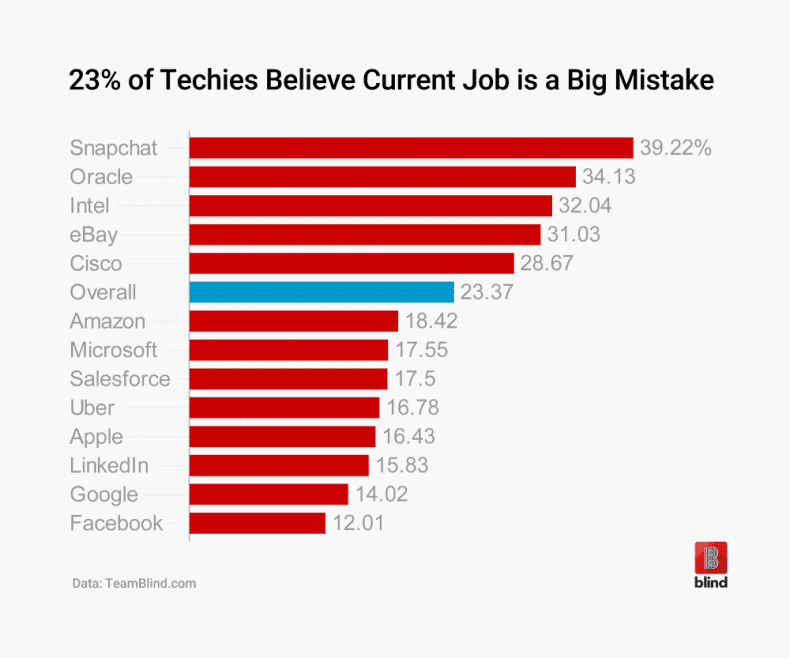 Here is a little bit more about the survey conducted. The survey ran from October 25th until November 01st, 2018 and it was answered by 10.396 users of the Blind application. Users were only allowed to answer once. Blind, an anonymous social network for tech workers conducted this survey.

If you were wondering what an employee burnout is, it is actually quite simple. Employee burnout is when the employees exhausted their physical and emotional strength. This usually happens as a result of prolonged stress and frustration. Keep in mind that if the employee or employees are burnt out,  it could lead to lower production rates of the company, and as well to depression of the employee. As a matter of fact, 39% of tech employees state that they are or feel depressed.

A lot of companies today have a high regret percentage of their employees. That may seem quite insane to you, but if you look at it closely, it is pretty expected since the tech industry is ever-growing and constantly changing. As the people from the anonymous social network explain, you cannot really explain why Snapchat has a high percentage and why Facebook has a low one. It seems like excessive employee regret and burnout may be a big problem for the tech industry at this moment and it is one of the problems in the tech industry that needs to be solved.

Everything You Should Know About Garden Workshops

John R. Jeffries - July 14, 2020
0
Living in an urban area can be a good and a bad choice at the same time. Schools and workplaces are all located in...