Do your essays continually fail to get that A+ because of a series of repeated mistakes? Analyzing them one by one and improving on them is crucial to bring your writing to the next level. If you don’t have the means to turn to professional paper editing, proofread it yourself!

Here are 5 mistakes that most students do.

It may sound ridiculous, but according to Western Washington Library, the number one mistake that students make in their essays is using the wrong words.

It may be because they misuse easily confused words or use words in the wrong context. But, the result is the same: these students fail to meet the basic requirements for a sound essay.

Why is this happening? It may be because many students spend so much time writing their essay that there is little time left for proofreading. This is especially relevant for limited time tests like IELTS or TOEFL. If you proofread the paper a couple of times, you are already ahead of many students.

The next on the list are common grammar mistakes. Missing comma after an introductory element is the second most common mistake in essays.

Missing commas in other grammatical situations, wrong verb tense, and comma splice are also in the top 20 mistakes.

However, these are easy to notice if you proofread the text with enough attention. Let’s dig deeper into the more difficult ones.

Whenever you are making a list of things in your essay, you can fail to make all the items similar. If you do this, the whole list seems off.

Introspection requires you to do the following:

You can see here that the verbs are in disarray. If you’re making a similar list, make sure all of them are uniform.

For our example, the correct variant would look like this:

Sometimes people try to impress the teacher and make the language overly pompous. For instance, they write insanely long sentences.

There are a number of problems with this. It makes the paragraph harder to read, it creates opportunities for mistakes, and it doesn’t make you sound sophisticated in the least.

Here’s how this may look in a reflective essay:

When I was fourteen, my father, who was a big fan of the Lake District, took me fishing to one of the lakes there, but I went sick shortly after we parted and spent the whole trip feeling miserable, which made him call me weak all the time, and I still feel bad about it.

Here’s how it looks when edited:

My father was always a big fan of the Lake District. When I was fourteen, he took me fishing to one of the lakes there. But, I went sick shortly after we parted and spent the whole trip feeling miserable. During our “trip,” he was calling me weak all the time. I still can’t forgive him for that.

In a nutshell, what works in a Maugham’s novel, doesn’t work in an essay.

Any text has a recognizable style. It’s not about your personal style of writing, but about keeping the text consistent.

Some essays require you to be dry, while others may be leaning towards a conversational style. But, mixing up the two just doesn’t work.

Any scientist who holds a belief in God, whether it is the Christian God or an abstract deity, ain’t gonna say faith contradicts with science.

It’s no mystery that some scientists believe in God. Does it mean they’re not real scientists? Nope! You can hold a theocratic belief and still be a man of science.

Dropping even one word that doesn’t fit the style you’re using can ruin it.

It may sound counterintuitive, but you don’t have to tell your main idea in the introduction. This part is for spurring the interest in the topic, not saying your ideas outright.

A high-grade essay reads as a narrative where you start off by introducing an idea, develop it in the main body step by step, and end with a brief conclusion.

Fail to do this, and your essay won’t get the points for integrity.

What many students do is they see the topic and start writing right away. This may result in a huge number of points deducted from your essay score. It may even be rejected.

Check all the instructions you are given and look for the following:

Follow this, and your essay will be one more step towards getting that A+. 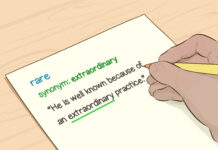 4 Advantages of Using the Thesaurus When Writing