The famous German luxury car brand is preparing its C-Class, and thanks to the wake eyes of spy photographers we have some images of it for you. You all know that the C-Class is nearing its mid-life cycle and it is in need of refreshment which is what Mercedes has prepared for us. This model is not that old with its last-gen introduced in 2015 and thanks to the current practice, which Germans hold dearly, it is time for the 2019 refresh.

What you will see on this prototype is that its exterior will be only slightly affected with only minor tweaks done to the body of the vehicle. There will possibly be some updates in both bumper areas, and we also anticipate some changes in the internals of the light cluster. Why exactly do we expect this? Well, the fact is that there were several C-Class test mules that seemed to host headlights that very closely resembled the units you can see on the latest E-Class.

Interior will get a retouch as well, and the spotlight will take a new touchpad controller that will be placed in the center console. It will replace the rotary dial which is currently found in pretty much every Mercedes model out there. They also decided to redesign the steering wheel which now looks awesome and has a lot more room for numerous controls. The deal with the instrument cluster is a bit confusing. On this spied C-Class it seems that the traditional analog instrument cluster remains, but we have also seen a few versions with a digital one taken from the from the E-Class and S-Class. For now, we are not certain if the 2019 C-Class will transition to the digital cluster or will it be sold as an option, which will be somewhat similar to what Audi does.

As far as engine department is considered, it seems that the updated 2019 C-Class will boast with the company’s next-generation powertrains that debut in the 2018 S-Class. Those units will feature numerous efficiency improvements including a single electric motor to replace the starter motor and alternator as well as provide a performance boost. But that is not all, the company’s new engine lineup is designed modularly which allows 6 cylinder units to move to an inline design instead of the current V6 configuration.

So far that is all we got, for all and any updates check back with us, and enjoy this gallery of spy shots of the gorgeous 2019 Mercedes-Benz C-Class. 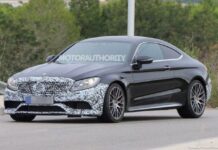 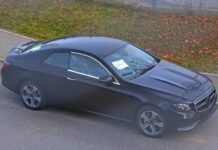