Thanks to the resilience of the German engineers and their tendency to test their vehicles in the cold-weather and on icy roads, we managed to get a glimpse of what seems to be a 2018 Mercedes G-Class. Thanks to the video that we acquired, besides the spy shots, from the rumbling noise that comes from the tailpipe of the tested G-Class we presume it might as well be the G63 that we caught here.

Since this is not the first time the new G-Class has been spotted by the spy lenses, we can see that nothing changed on the styling front and that it retained its boxy shape, but there is something new here. Our spy photographer managed to get a clear shot of the cargo space of the new G63, and as it seems the engineers did not have any troubles fitting all of their equipment out back and still have some additional space at their disposal. This all is thanks to a slight increase in G-Class’ dimensions, which is now according to the reports wider and longer than the existing model.

To those who concern that the increase in size will mean an increase in weight, you can rest assured that this won’t happen because Mercedes has moved this SUV to a more modern platform. According to some reports (probably speculative), this new platform will be able to reduce the overall weight of the G-Class from 440 pounds (200 kilograms) to 900 pounds (408 kg).

Under the hood, the song will remain the same – Mercedes‘ 4.0 L biturbo V8 which will now come in more trims and a replacement for the current 5.5 L biturbo V8 in the G63. On the video you will see something that can only be understood as the attempt of engineers to tune out the exhaust sound to fit the overall rugged look and conduct of the G-Class. Depending on the model you chose, the company will offer you a 4.0 L unit that will be able to produce between 470 HP (350 kilowatts) and 603 HP (450 kW) which is a very wide range to choose from.

Since we have been seeing the G-Class testing for months now, including both the long-wheelbase and pickup versions, we hope that official debut should finally happen sometime later this year but the bad news is that we will most likely have to wait until 2018 for the AMG models. As it has always been so far Magna Steyr in Austria will assemble them, because why change the team that is still winning. 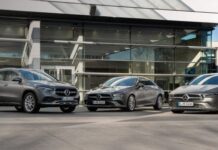 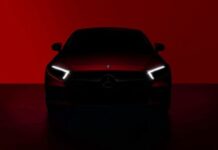 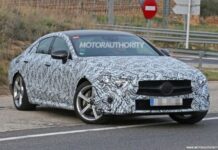