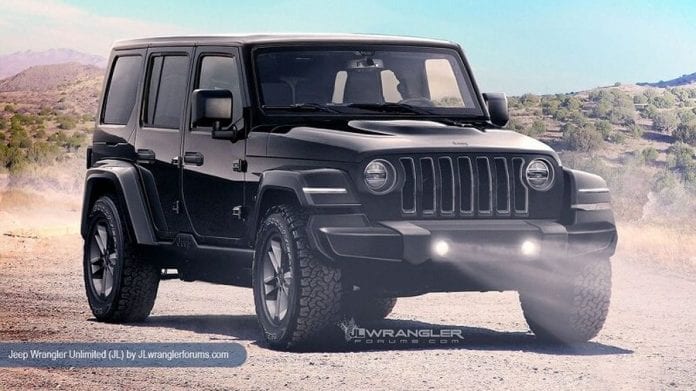 Jeep Wrangler has been the iconic American vehicle ever since World War II. The Jeep spirit lives on today, and the ongoing Wrangler was introduced in 2007. In 2012, the interior was updated, and it was followed by a powertrain upgrade a year later, maintaining the Wrangler fresh on the market. The sales of this model were always high, and in 2015 it sold more than 202,000 examples, but there is one version we need to give a shout out to – The Wrangler Unlimited. Now, Jeep is preparing the 2018 Wrangler, and a two-door prototype has been seen in a parking lot earlier this week.

The production of the 2018 Wrangler will probably start in November this year which means that the press launch will be in September. The Wrangler Pickup production will begin one year later.

There are a lot of rumors about the engine lineup of the new 2018 Jeep Wrangler, and a 3.6-liter Pentastar V6 is probably going to be one of the engines under the hood. However, the power increase is inevitable, and it might reach 300 hp and 270 lb-ft of torque. The unit will be mated to ZF eight-speed automatic transmission which comes instead of the old five-speed auto. Also, the six-speed manual is probably going to return, but the big news is the addition of the 3.0-liter EcoDiesel.

This unit is sourced from the Ram 1500, and it will deliver 240 hp and 420 lb-ft of torque in the new model. It will be connected to the same ZF transmission, but manual option availability is unknown at the moment. This will be the choice for the off-road enthusiasts.

The exterior of the vehicle will bring a little bit of everything. There will be some new cues, but most of Wrangler’s exterior will be iconic and easily recognizable. That being said, the seven-sloth grille and the windshield will make a comeback. The molded plastic par-bench bumper up front will be kept, but it will be redesigned, whereas, at the back, the Renegade-like taillights are expected. The spare tire, as well as plastic rear bumper and a tow hook, are, of course, featured in the back.

What is controversial about the design is the top. Rumor has it that Jeep won’t feature a removable hard top or canvas soft top which is placed over Sports Bar roll cage. What we expect is the roll-over protection integrated into the non-removable roof structure. The position of the pillars will be completely different, and the same will be with the Unlimited model.

The JL will come with removable panels on the top and sides, and they offer a plenty airflow through the cabin, so there is no reason to worry. This removable roof panel will be similar to the one on the Renegade, but whatever happens to the roof happens, and we will soon find out. The doors will remain removable, so we don’t need to worry about that.

The only concrete information about the new Jeep Wrangler’s interior is the introduction of the rotary shift knob for the ZF eight-speed automatic transmission. However, there are some things we will definitely see in the cabin of the new Wrangler – upgraded technology and rough materials which you will be able to wash with a garden hose.

Jeep is supposed to offer 5.0 Uconnect system, but as an optional feature, we will be getting FCA’s 8.4-inch Uconnect infotainment system. Furthermore, we expect Bluetooth, navigation, third-party applications and satellite radio to be standard. In terms of cleaning up your cabin, vehicle’s carpet will be easy to remove as well as rubber grommets which will be there as drain holes. The seats will come with a tight-weave cloth which is easy to clean, but the company will also offer leather as an option.

A new render of a 2018 Jeep Wrangler two-door shows us some new cues!